Changing political parties, yes, I did! 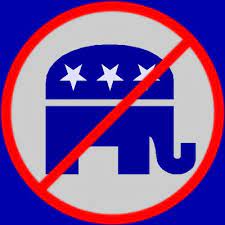 I wrote in the past how I was a vegetarian Republican (here and here). In fact, I have voted Republican my whole life (and I'm 51 now). Well, I figured it's time that I share with you all that I'm no longer a Republican.

A couple of months ago (around March 2022), I sent in my voter registration change request, asking to be made an independent. I no longer want to be associated with the Republican party. There are so many reasons that have prompted this change in me and they have been taking place over the last few years. Increasingly, the party does things that I don't agree with and will not support. There were always a few things I didn't agree with, but that's to be expected with any party. You probably won't agree on everything. But the list started piling up, becoming more noticeable, and I began to be embarrassed to be aligned with some of the garbage they were touting.

I live in Florida, so some of these things are specific to this state, others are not. There are too many things to list, but here's a small sampling of them:

I could go on and on, but over the last several years the things I don't care for have been piling up. I finally had to get to a point where I said I have had enough and I left the party. I'm not against gays, book banning, drag queen shows, etc. I believe everyone should have access to healthcare, regardless of their wealth status, and I do not like the push for Christian nationalism one bit. The party of small government is no more. Now they are making new laws weekly, even telling you what you can and cannot say and what shows you can take your kids to. It's ridiculous. I was also disgusted by the unprofessional Tweets  and behavior by Trump, including surrounding what happened on January 6th. Those things all added up to my leaving the party.

You may be thinking "but they have always been the party for those things." To that I would say that things hit me harder in the last few years. I battled a health condition and felt like my country would rather I die than to give me affordable healthcare. I also turned the news off, so I'm no longer getting one-sided BS enter my brain (and both sides do this in the media). We consume with more than our mouths. What we consume on television, the radio, etc. all help influence our opinions. When I went through these things and turned the news off I was better able to think for myself, rather than having the news slant something to influence how I should view a situation. I also turned off the political talk radio I used to listen to for hours per day as I worked.  The more I turned their voices off/down, the more I heard my own inner voice.

So right now I'm comfortably sitting in the independent category. What will happen in the upcoming elections I have no idea. I'll listen to both sides and if I feel someone represents how I feel then I'll vote. If nobody does, then I'll sit the election(s) out. Either way, I can no longer call myself a Republican when there are so many things about the party that do not resonate with or represent me. So I'm no longer a vegetarian Republican. I still have numerous friends who are, and I've been sharing my feelings with them on this issue. Some think I'm crazy and I'm the one who has lost it, while others see some of my point on numerous issues.