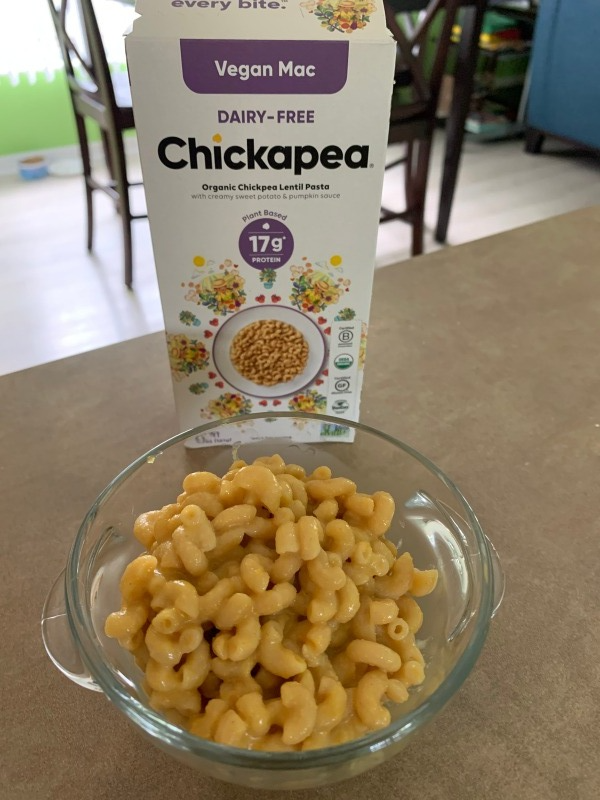 Today, I came across Chickapea vegan mac and cheese while in the health food store. I was there with a friend, who wanted to grab a quick sandwich from the ready-made cooler. When I saw this I decided I'd get it and try it for lunch.

I took it home and followed the package instructions for cooking it, which included rinsing the pasta after draining it. That seemed to cool it off quite a bit, which I didn't care for, but okay. Reading the package, the pasta is made from good ingredients, and it has a lot of fiber, so that's good. What I found odd was that it says there are 2.5 servings in this little box. I made it and decided I would scoop up the one cup that they were saying is a serving.

I thought the taste was pretty good. It's not great, it's not something really special, but it's pretty good. My own homemade mac and cheese is way better, but for a boxed one this was not bad. The taste was actually on the bland side, and I know if my husband was trying it he would have taken one bite and then doused it with hot sauce for some flavor.

The one cup, as I suspected, was not enough. A cup of this may be fine for a child, but not an adult. I went back for more, but made sure to save some for my daughter to try later. I ended up eating 2/3 of the box, so when you read the label it's quite conceiving unless you are just wanting a snack.

Would I buy this again? Maybe, but not at the $3.5o per box that I paid for this today. If it were on sale I may pick it up again, but it wasn't so good that it will make me want to run out and keep it in my pantry. I like that it's made from healthier ingredients, but you are paying a high premium for that, and it's imported from Italy, so it's well traveled.

The good thing is that there are so many boxed vegan mac and cheese options today! Chickapea vegan mac offers one more option for those who want a quick fix item.