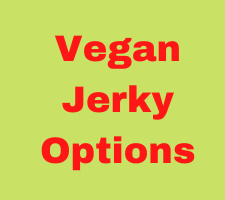 Vegan Jerky Options - They do exist! Stonewall's Jerquee - Vegetarian Jerky
This has to be one of the oldest varieties around. While there are quite a few new options available today, this one was ahead of the game. I remember buying this one 20 years ago! I don't see it as often in stores, but there is one near me that always carries it, plus you buy it online. We have always liked Stonewall's Jerquee. If you can find some to give it a try, I highly recommend it. I think it's pretty good stuff and I like that it was one of the first vegan jerky products around. It's made from soy and comes in a variety of flavors. 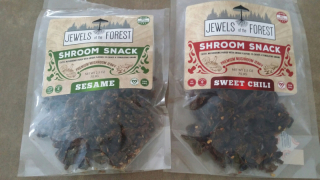 Shroom Snack Vegan Jerky
This vegan jerky is made from organic oyster mushrooms. It comes in a variety of flavors and it is honestly great! This is one of the best vegan jerky's that I've tasted. The whole family loves it. It's hard to keep a bag around, because we eat it so quickly once it's opened. This vegan jerky has a clean ingredient list, so you can feel pretty good snacking on it. You can order Shroom Snack Vegan Jerky online, or you may be able to find it in a store (I've never seen it in a store though). 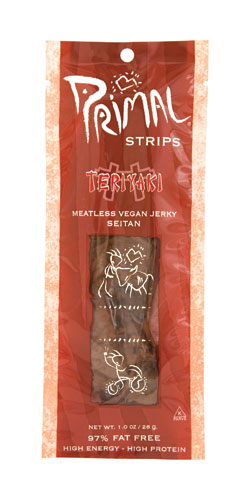 Primal Strips Vegan Jerky
This vegan jerky is usually easy to find. Many health food stores and places like Whole Foods Market tend to carry them, and you can easily find them online. Primal Strips are a vegan jerky that are made from wheat gluten, mushrooms, or soy, depending on the flavor variety. Their ingredients list is clean, so there's no unidentifiable items there. Primal Strips taste good, but the one problem I have with them is that you don't get much (maybe 2-3 bites) for around $1.40 each, because they are sold in single serving packages. That makes them pricy if you want to share them with the family. Now, here's my biggest issue with Primal Strips and it's something I wrote in my review of them back in 2009 - they are made in Taiwan! Yes, they are a product of Taiwan. I have an issue with that. These little snacks have traveled some 7,000 miles to make it to your store or home. I don't care for that, because of the carbon footprint. I think it's better to opt for a vegan jerky that is made in your home country. Sam's Harvest Soy Jerky
This vegan jerky is made by the same company that makes Butler Soy Curls and taco crumbles. I first tried them in 2019 and I loved them. They really do have a great taste. They are made from soy and come in a bag big enough to share with others. However, I have since discovered that they contain an ingredient that I try to avoid - carrageenan. If you are not familiar with this ingredient, it's one that is believed to cause inflammation in the intestines, so it's not something that I want to eat. Silk used to put it in their plant based milk products, until Dr. Gregor schooled them on how unhealthy it is for the body, and then they removed it. If this vegan jerky didn't have carrageenan I'd be more comfortable recommending it to people, but there are numerous studies linking it to causing inflammation, so I steer clear of it. Louisville Vegan Jerky
This vegan jerky can often be found at health food stores and online. It's made from soy and comes in a variety of flavors. It's a bit pricy, but it does come in a bag big enough that you can share a little with the family. I like this vegan jerky. It has a good flavor and texture. If you are looking for a tasty jerky to take hiking or something you can't go wrong with this option. They are good, satisfying, and are likely to please everyone. The ingredient list is not bad, so that's a bonus, too. This is one of the better picks you can make in vegan jerky. Gardein Plant Based Jerky
I like a lot of the products that Gardein makes, so when I saw they had a plant based jerky out I was intrigued. I figured I would like it and looked forward to trying it. Well, I tried it and what a disappointment it was. The flavor is really not all that good and the salt was through the roof. All I could taste was salt! Granted, how strongly you taste salt is genetic, so you may not taste it as strongly as I did. But for me it tasted like pure salt and was awful. My husband liked the texture, but thought the flavor was not up to par (he thought the salt level was okay). Neither one of my kids liked it. I had high hopes for their jerky, but I won't be buying it again. Their plant based jerky is made from soy and wheat gluten, and contains two forms of ingredients used in a MSG-fashion (celery powder and yeast extract), so the ingredients are not great and neither is the taste. You can find this one online if you want to give it a try. Vegky is a vegan jerky made from shiitake mushrooms. It comes in various flavors and sells for around $5 per bag (at least where I bought it at a vegetarian festival). The vegan  jerky has a good flavor and texture. The problem I have with it is that it's made in Taiwan. I really don't want my vegan jerky to travel 8,500 miles to reach me. That's just not sustainable or environmentally friendly. If you are in Taiwan then it's a good option.