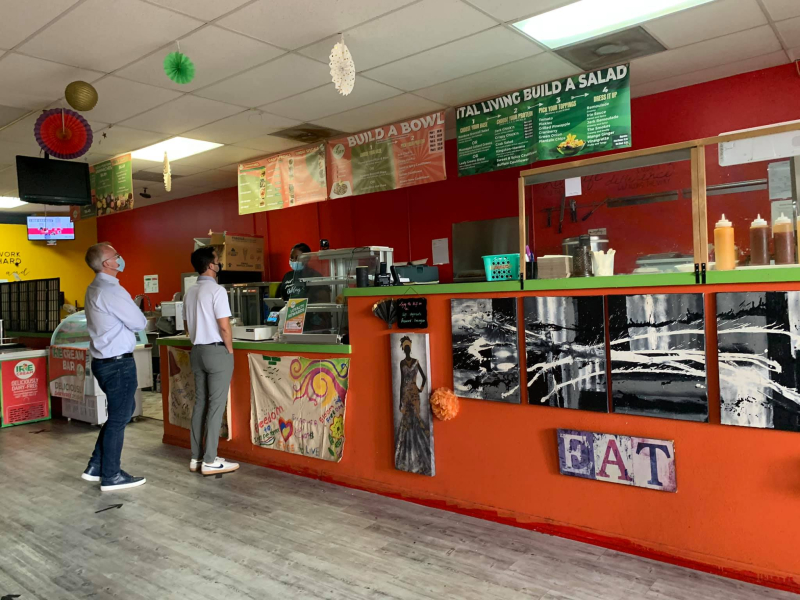 I've followed DaJen Eats online for the last year. I had been wanting to give it a try, so last week when we were in Orlando for an appointment we stopped there for lunch. I had never been to the Eatonville area of Orlando, so it was nice to see a different area of the city that we've been to so many times over the last 14 years since moving to Florida.

DaJen Eats is a Jamaican style vegan restaurant located at 323 E. Kennedy Blvd in Eatonville, Florida. They probably usually offer dine in, but with the pandemic they just have outdoor seating available, which is fine. I had went there with something in mind that I wanted to try. I had been eyeing the chick'n biscuit sandwich for a long time. I just didn't know until after I tried ordering it that it's only available on certain days of the week, and it wasn't that day. Darn! My next choice was a vegan rib sandwich, which I placed the order for (and then about 10 minutes later was told that you can't get on that day of the week either). So I ended up going with the vegan fish and chips, since it was the Friday special. My husband ordered the jerk chick'n sandwich and a side of peas and rice.

We took a seat outside and waited for our order to be ready. The place had a steady stream of people coming and going. They were doing some good business on this Friday afternoon. I really had to go to the bathroom (it was an hour drive over to the restaurant and I had been drinking tea on the way there). Too bad, they had the restroom closed off, so it couldn't be used. That was a bummer, as I would need to sit through lunch needing to pee. Anyway, our food was ready.

Both of our dishes looked good upon first opening the containers. I also thought it was pretty cool that the utensils they gave were wood, so they would be biodegradable. My husband really liked his jerk chick'n sandwich. I tried a couple of pieces of the jerk chick'n that fell off and it was tasty! The peas and rice were also really good (he gave me a few bites). We both liked them. Now for the vegan fish and chips. Ugh. It was my third choice, which was disappointing, but the food was disappointing, too. In fact, my dish was not good at all. The fries were so overcooked! They were hard, I'm not talking nicely crispy (because I like them like that), these were hard and tasteless. I ate about a quarter of them before saying I couldn't handle anymore. I didn't like the vegan fish either. I just didn't care for the taste at all. It was just pure salt to me.

Now here's the thing about salt... I learned on a biology field trip with my daughter's high school class last year that your taste tolerance for salt is genetic. People can taste the same thing and to some it's super salty, to others it's mildly salty, and to others it's not salty enough. Our tolerance for tasting salt is genetically pre-determined is what was taught on that field trip. So I kept that in mind while tasting this dish. It was way too salty to me. All I tasted was salt. My husband doesn't taste salt as strongly as I do, so to him it wasn't nearly as salty, but he still wasn't a fan of the dish either. So my dish ended up being wasted and I hate to say it, but I left the restaurant hungry.

So we have one who liked their dish and one who didn't like it at all. I will say that I would go back and try it again. I still want to try that chick'n biscuit! I would also like to try one of their bowls with chick'n. I appreciate what they are doing there, but that particular dish just didn't work for me. If you are in the Orlando area, give DeJen Eats a try for yourself to see what you think. 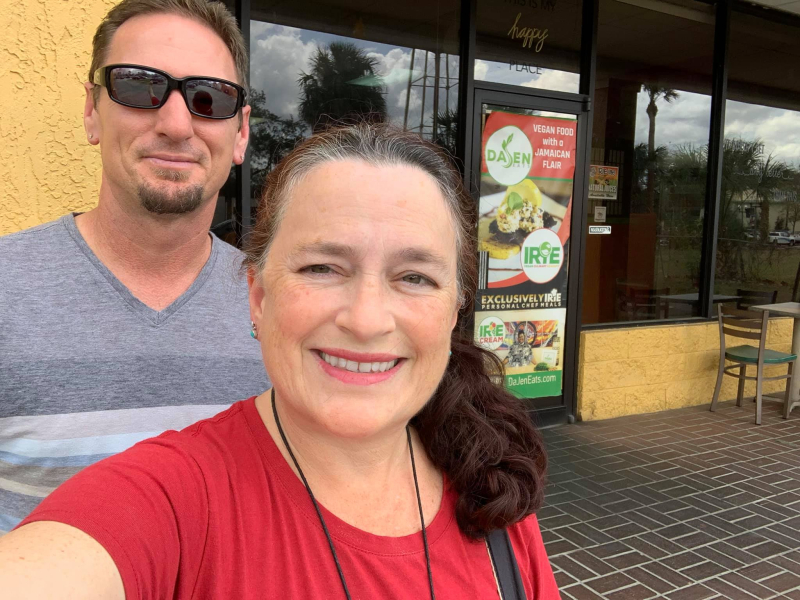 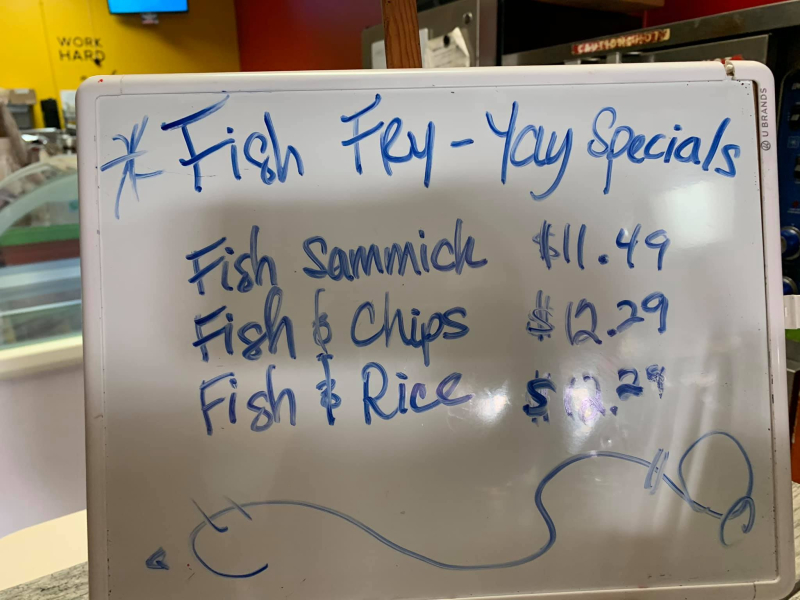 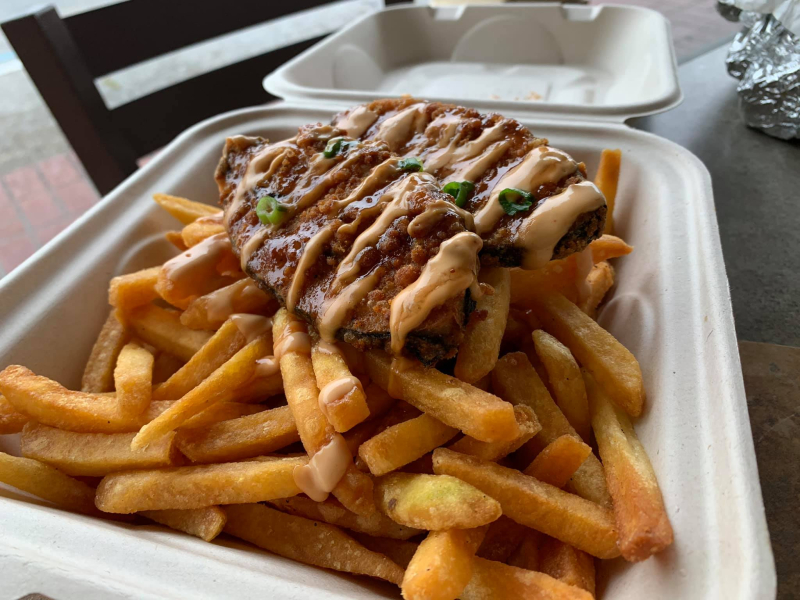 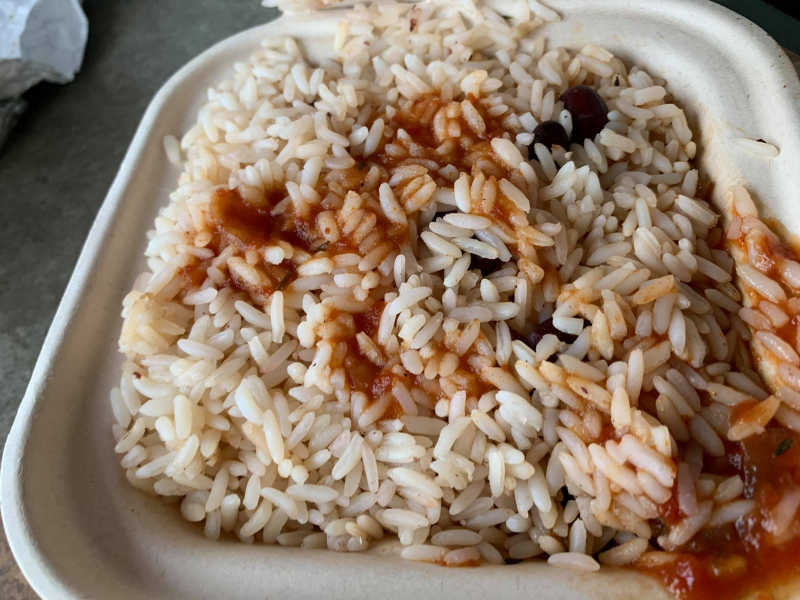