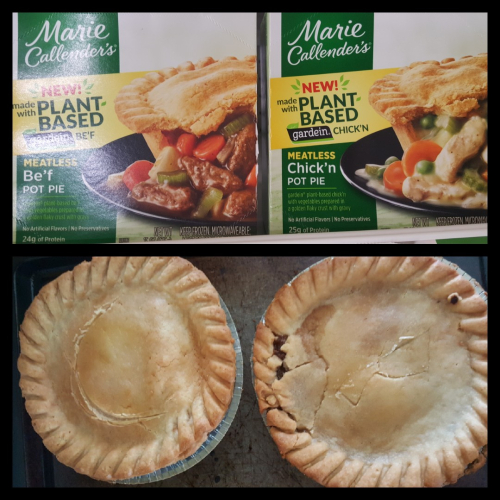 This morning I saw that Marie Callender's has new plant based pot pies out! I raced to the store (Publix), so that I could get one to try for lunch. My daughter (who has never had a pot pie in her life) also got one to try.

I was happy to see that they were $2.91 each, which was not a bad price. They offered a veggie chick'n one and a veggie "beef" one, both made with plant based meats from gardein. I like most gardein products, so I figured that part would be good. We got one of each and headed home.

Being "plant based" I just ignorantly assumed it was vegan. I should know better. For years, when something was "plant based" it was vegan. But that definition has been twisted and stretched over the years. When I got home I looked at the package (which I should have done at the store) and saw that they are vegetarian, not vegan. Okay, I wasn't thrilled with that, but wasn't going to waste them either. We were still going to try them for lunch.

They take an hour to cook, which is typical. We popped them in the oven and eagerly waited. When they were ready we let them sit and cool off for a while and then we dug in. We both loved the crust. Of course, how could Marie Callender's not make a great tasting crust, right? The crust was really good! We were not big fans of the gravy part. For one, I couldn't get over the fact that the gravy was the non-vegan part, as it had dairy in it. So I didn't each much of the gravy. It was also very salty. The veggie meats in it were good, as I suspected. There were very few pieces of vegetables in it. It was mostly the veggie meats and lots of gravy.

As we ate, we were reading the box more. We saw what the nutritional breakdown was. Yikes! One pot pie is considered two servings! So a pot pie ends up being around 1,000 calories, 50 some grams of fat, and over 1,500 mg of sodium. Wow. I wasn't thrilled to see that info, and neither was my daughter (she's a pretty nutritionally savvy teen). We both ate around half of the pot pie and didn't want anymore. We were not fans.

In all, I'm really glad these pot pies exist. I really am! I'm sure there will be some meat eaters who opt for them, which is great. I'm sure some veg eaters will also like them. Personally though, we will probably not buy them again. Not only because I'd prefer they be vegan, but because the taste didn't win me over either. It did, however, inspire me to make a vegan healthier pot pie for dinner one day next week!

Thanks for the review! Was so disappointed that they had to put milk in it, they could’ve opened up a whole new market (vegans) if they left it out. This is literally what I have been waiting for for a while and of course it’s not vegan! Do you know of any other good chick’n pot pies?

I agree! It makes no sense. They could easily swap out the cow milk for a plant based milk and open up their market more! The product quality would not be any different, so why not make it vegan?!

The only other potpie I know if that is vegan are the ones made by Amy's. They are not great, but they are pretty good. It doesn't have a great crust on it, but it's better than none... until someone makes a great vegan potpie! ;)

You can find the Amy's one here to see where they are sold in your area. Most mainstream grocery stores seem to have them.