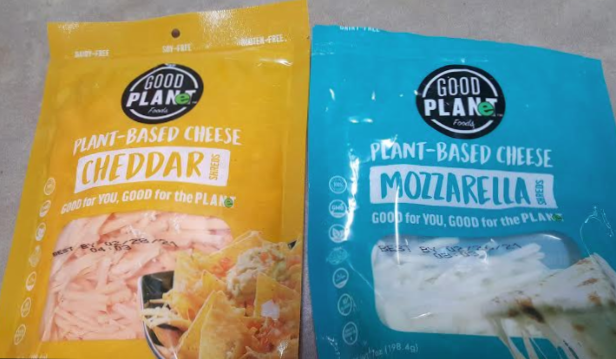 While shopping at Walmart I happened to spot a new plant based cheese. It was not in a location of the store I would have went looking for it, which is why I was surprised to see it. Typically, plant based or vegan cheese is found in the produce department (Publix), or in with the dairy cheese options (Target). But at Walmart, this vegan cheese was on display in a different area, all on its own. It was on a refrigerated end cap (at the end of an aisle), on the top shelf. Kind of hidden really, but it still caught my eye as I was walking by. I'm always up for trying a new vegan cheese, so I bought some.

Good Planet offers a variety of options, including slices and shreds. At the Walmart I was at they only had cheddar and mozzarella shreds, so I bought some of both. This plant based cheese is made with coconut oil. It does not have a long ingredient list, which I really like, and it is all vegan. Interestingly though, they stay away from calling it "vegan" anywhere on the package. My thought is that they do this because vegan cheeses tend to scare some people and have a negative reputation. But after tasting this plant based cheese, I think it could help to elevate the vegan cheese reputation.

We have used Good Planet cheese now to make my mac and cheese, as well as to use it sprinkled on other things. We also used the mozzarella one in our vegan lasagne. Both of them are really good! The first thing I noticed when I opened the cheese is how large the shreds are. They are bigger than most of the other vegan cheese I've had. I tried them both on their own and they were good. Both of them tasted good in the dishes that we used them in, and they melted nicely.

Two thumbs up for the Good Planet plant based cheese (vegan)! We liked it and will certainly buy it again. I wish it was more prominently displayed at Walmart so that people know it existed. Having it in the produce department or in the dairy cheese department would be a nice touch, rather than it being hidden on an end cap where people don't go looking for any type of cheese.

Check out their website here to learn more about Good Planet plant based cheese and where you can find it near you.