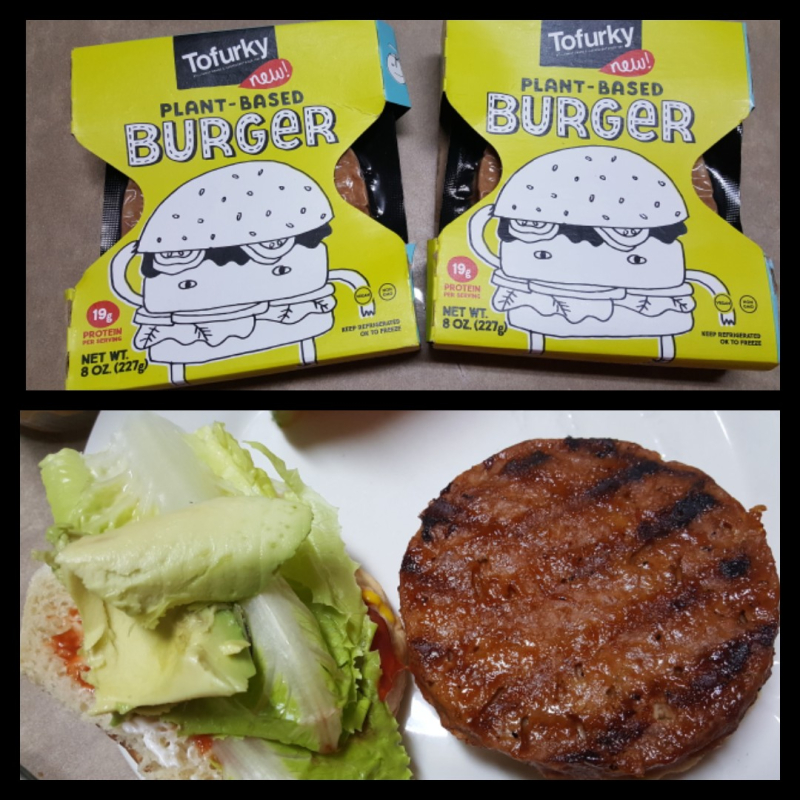 I've been buying Tofurky products for probably 20 years now. We are big fans of Tofurky! I'm a big fan of their deli slices and we keep them in the house pretty much at all times. We also had their roasts every year for Thanksgiving. This past weekend, while at Target, I saw that there are now Tofurky plant-based burgers in the produce department. We had to try them!

The burgers come in packages of two and they were $3.29. We bought two packages so there was enough for all of us. My husband grilled them up with a little BBQ sauce on top. When I opened the burgers I was surprised at the amount of plastic they are encased in, which seems excessive, and the burgers seem mushy. Still, I remained optimistic as I cut slits in the plastic so that my husband would be able to easily get them out to put on the grill. I didn't want to take them out and put them on a plate, because they were so mushy that I thought they may fall apart or could get real messy. This way worked just fine.

I put the burgers on a bun, topping it with the usual lettuce, tomato, onion, condiments, and some avocado. The surprise came when I bit into it. The burger was really good! Many veggie burgers are dry when they are cooked up, but these were not at all. They had a nice taste and texture. I guess the mushiness to start helped ensure a nice moist texture after being cooked. Everyone liked these burgers, with my son saying he thought they were one of the best ones he has tried (and he's tried a lot of veggie burgers). I have to agree with him. The Tofurky plant-based burgers quickly moved up to the top of my list of favorite veggie burgers.

These Tofurky burgers are vegan and made from soy and wheat.

We will certainly buy the Tofurky plant-based burgers again. They are great. Two thumbs up!