Review: In Search of the Wild Tofurky by Seth Tibbott 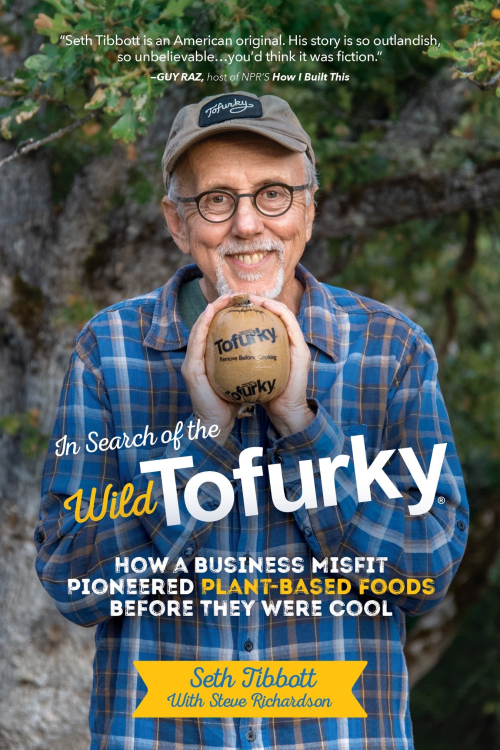 I've had this blog since 2009. Anyone who has followed it at all knows that I'm a big Tofurky fan. It must be 20 years now that I've been eating their products. So when I saw that the founder of Tofurky, Seth Tibbott, was coming out with a book, called "In Search of the Wild Tofurky," about his story, I was immediately interested.

This week I read the book, and I have to say that I really loved it. I went vegetarian in 1995, which is the same year that he created the Tofurky. Is that a coincidence, I wondered? Or was it a good omen? I remember my first couple of Thanksgiving gatherings as a vegetarian, and they were odd and uncomfortable. A few years into it, we discovered the Tofurky, and never looked back. We love the Tofurky, and it quickly become our holiday tradition. For years now, we also always have the Tofurky deli slices in our house at all times, and we buy their other products here there, such as the sausages.

This book tells the slow painstaking process that Tibbott went through to get to where he, and the company, is today. He shares about his meager beginnings, how hard he worked along the way, and where it took him. He is also humble in sharing the credit for the company's success with those who surrounded and helped him along the way.

Tibbott's story is inspirational, because he has shown that you can make money and change the world at the same time. His ingenuity certainly helped change the world, at least for those of us who want plant based foods. His story is a good example of the American dream fulfilled. If you work hard, good things happen.

It was apparent throughout the book that he is a liberal (I'm a conservative). He complained about how Regean got into office and cut the budget for the environmental programs he had been working for. However, I loved at the end of the book in his list of people he thanked, Regean was one of them. This was because those budget cuts forced Tibbott to have to do something else. Those programs being cut were the beginning of the Tofurky we know today. Had they not have happened, we probably wouldn't know Tofurky today. As one door opens, another closes.

He explains in the book that they really listen to their customers. It made me think of the few times I've written them. Once because their products suddenly could not be found anywhere when they were having production challenges, and then when their recipe seemed to change for a short period of time (the deli slices when through a period of being too salty, not the flavor I was used to for years). It made me wonder if they had taken my comments about noticing the recipe had changed and looked into quality control.

This is a good read for anyone who has an entrepreneurial dream, as well as those who like American success stories. It's also a fun read for anyone who is a Tofurky fan. I really enjoyed the book and learning so much about how the company was started and how it got to where it is today. Tibbott seems like a fun guy who has maintained having a passion for bringing the world tasty meat alternatives, and my family is grateful!

Two thumbs up for "In Search of the Wild Tofurky" by Seth Tibbott.