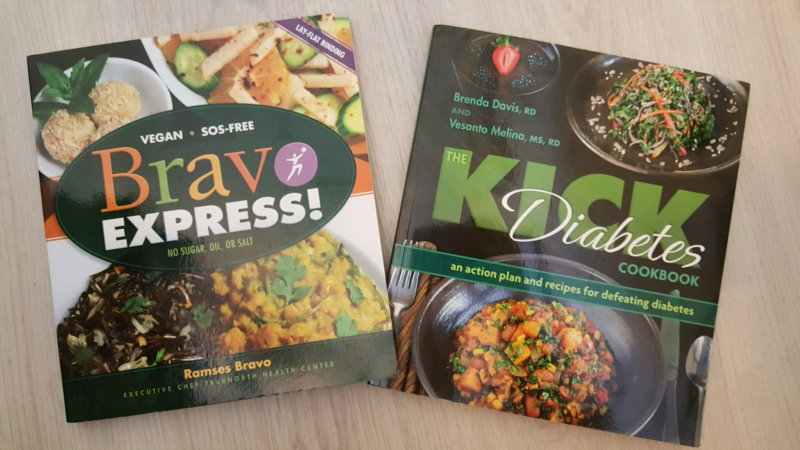 I got two new plant based cookbooks in the mail. I always get excited when I get new vegan cookbooks. I have a great collection and love to get more. I also give many away to others in an effort to introduce them to plant based cooking. In this package, I received "Bravo Express" and "The Kick Diabetes Cookbook."

"Bravo Express" is a plant based cookbook by Ramses Bravo. All of the recipes in it have no sugar, oil, or salt. If you are looking for a plant based cookbook that will offer up some healthy meals, this is it. Some of the great sounding recipes in this book that I'd like to try includes cream of corn soup, cilantro-buttered corn, herbed potatoes, garbanzo crunch, and savory lentil crepes. This book offers a nutritional breakdown for each recipe, including calories, protein, fat, carbs, fiber, sodium, etc.

"The Kick Diabetes Cookbook" is by Brenda Davis and Vesanto Melina, who are both registered dietitians and veterans in the vegan cookbook field. This book piqued my interest because I have a family member I'd like to send it to. I'm hoping it can help introduce some good plant based cooking to the person. The book focuses on offering an "action plan and recipes for defeating diabetes." That sounds like a great idea! The book is filled with good solid information about defeating diabetes, making it ideal for anyone who has it or may be on the path to having it.

Some of the recipes that sounds great to me in this diabetes plant based cookbook include navy bean and mushroom soup, black-eyed pea and eggplant soup, cashew mayonnaise, tofu marinade, African chickpea stew, marinated tofu, tamale pie, and lentil-quinoa nut loaves. So many good things to try.

Two thumbs up for these new plant based cookbooks. I'm looking forward to trying some recipes and sharing the books with others!