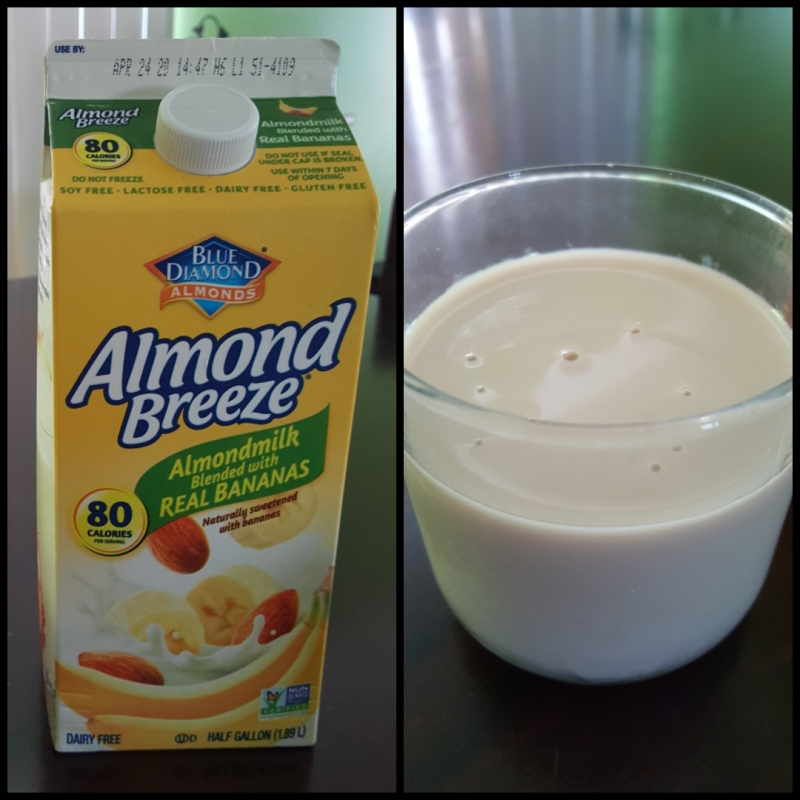 While we were grocery shopping today the Almond Breeze almond milk with bananas caught my eye. I was intrigued and excited to try it. I couldn't resist picking some up to take home!

Shortly after we got home I just has to give that banana almond milk a try. The package says that there is half a banana in every cup. Sounds delicious!

I shake the container, and start pouring it into the glass, only to notice that it is an odd color. Totally not what I was expecting. With it being banana almond milk I guess I expected it to be slightly yellow, maybe a soft or pale yellow color. The container is so bright and yellow that it just seemed fitting. But no, it was almost a light grey color. Totally not appealing in appearance at all. But I was still in to give it a try. I drank the glass of milk and overall it was "okay." It was disappointing in both appearance and taste. The color was strange and I expected it to be sweeter and taste more like bananas. There's more of a light banana flavor.

Next up, I poured a glass for my daughter and husband, neither of whom had seen me drink my glass. I wouldn't tell them my thoughts either, because I wanted to see what they thought of it on their own. Both commented on the color, with my daughter finding it really unappealing looking. They both drank it down and my daughter thought it was just okay. My husband said he thought it was pretty good. My son wouldn't try it. He doesn't really drink milk. He only has it if it's in a smoothie or in cereal.

Overall, we jut think that the Almond Breeze almond milk with bananas is just okay. I probably won't buy it again in all honesty. I can see using it to make smoothies, if you don't want to purchase a plant based milk and bananas separately. But to have a flavored plant based milk for a treat I will just stick with buying chocolate once in a while. The banana milk sounded much better than it ended up being.