Do celebrities influence people to be vegetarian or vegan? 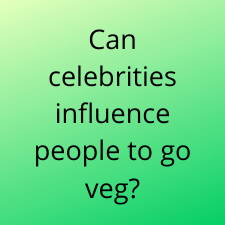 In an online vegetarian/vegan group I'm in someone posted saying that celebrities don't have influence on these issues, so people need to stop talking about them. Or something to that effect, that's certainly not verbatim. The statement that the person posted got me thinking and wondering whether or not celebrities have any influence over people when it comes to vegetarianism or veganism.

After thinking about it for a short time, I came to the resounding answer - yes, celebrities really do have an influence when it comes to getting people to consider going vegetarian and vegan.

The reason it took me only mere minutes to come to that conclusion is because of my own veg story. When I was around 10 years old (1981), my favorite musician was Michael Jackson. In fact, I was his biggest fan. I adored and loved everything about him. Someone gave me a book about him and as I read it I came across a passage that said that Michael Jackson was a vegetarian. That was a word I had never heard of, but I was intrigued.

Curious and wanting to learn more, I went to my mother who explained to me what a vegetarian was (or what she thought it was at the time). I wanted even more info, because it was something that immediately resonated with me. I lived in a town that had less than 3,000 people and the library was super small. There were no books on vegetarianism, and since there was no Internet at that time, all I could do was go by word of mouth in asking people about the topic. But I was in!

For over a year at that age, I went vegetarian. It didn't last throughout my childhood, because it was a tad difficult when you are the only person you know who is vegetarian, have limited resources, etc. But the idea always stuck with me. I had a sense of compassion for animals that most others just don't seem to have. At that age I also hung up the fishing poll and proclaimed that I would never hurt fish again (and here I am 39 years later and have not). I also saw other ways that animals were being harmed. I was growing up in a place that was a big hunting town and always felt uncomfortable seeing the animals being hurt. Now my thoughts of compassion for animals seemed more validated.

Fast forward to me moving out on my own as an adult. I was ready to take control of what I wanted to eat, and it didn't take me long to become a vegetarian. By this time the Internet was still not available, but I lived in a larger city that had books I could check out and learn more about vegetarianism. I learned everything I could (which got much easier once the Internet came around). I also found a local vegetarian/vegan group and attended meetings so I could learn and find support from others living the lifestyle.

I've been vegetarian (primarily vegan) since 1995. But it all stems from the seed that was planted because my favorite musician was a vegetarian. Michael Jackson planted the seed and opened up a whole new idea to me. That celebrity had a profound impact on me when it comes to vegetarianism. I know that this lifestyle I have chosen and will have for the rest of my life all started with the seed that was planted by him.

So yes, celebrities can really have an influence on people when it comes to getting them to go vegetarian or vegan. They can plant seeds, and maybe those seeds sprout then, or maybe years later, but they put the idea there all the same. They introduce someone to something they hadn't otherwise considered, or that they thought wasn't for them personally.

Kudos to the celebrities who are vegetarian and vegan and let fans know. I recently cheered when I saw Joaquin Phoenix stand up for animals when he received his award. There's no doubt in my mind that he planted seeds of compassion that evening!