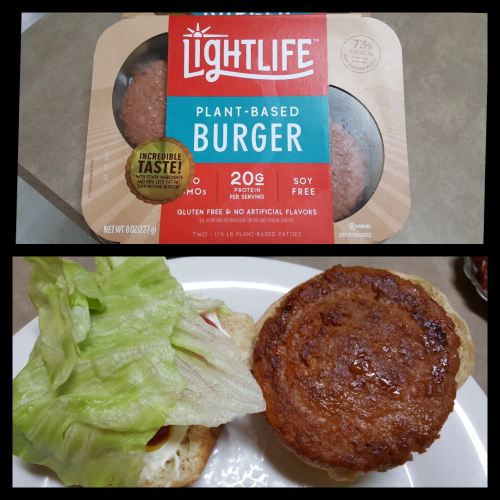 Let me be up front and say that I tend to not be a big fan of these types of burgers. You know, the ones that are typically found in the meat department and look like flesh. Well, I bought these last week at Publix, simply because they were on sale BOGO, and there was an iBotta rebate for them at the same time. So I got them really cheap.

I have noticed there is a trend in veggie burgers for them to start coming in packages that have only two burgers and they are expensive. Plus, the way they package them they have a lot of plastic waste. Anyway, packaging aside, let's get down to how they taste.

I didn't like the smell of them when I opened the package. As I cooked them up they seemed to "bleed" on top, which I thought was gross. Personally, I don't need or want my burger to look like it is bleeding. I served them up with some fries and fresh pineapple. Nobody liked them. My husband thought they had no flavor, I thought the texture was too much like meat for my brain, and my kids didn't like them at all. These burgers look and cook up like Beyond Burgers, but they don't have as much flavor. So, needless to say, we wouldn't buy these again, even if I do get them really cheap like I did this time.