Tips for Getting Kids to Love Vegetables 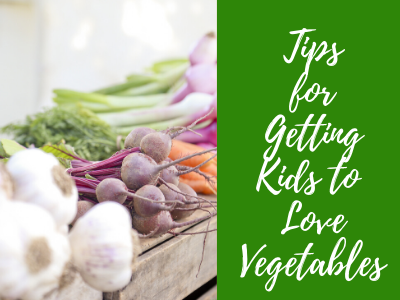 How do you get kids to eat vegetables?

This is a question that I find many people have, especially if they are new to vegetarianism, veganism, or they are making the switch to a plant based diet. Let me share a few things I did along the way to get my kids to be veggie lovers.

Around three years ago, we were going through the line at a local restaurant where you tell them what you in your wrap (a falafel wrap). My son was only 10 at the time and he loaded it up with all kinds of veggies. He does the same thing at Subway, by the way. The man working at this restaurant couldn't believe all the stuff he was getting at his age and said to him "you have quite a well developed palate." Yes, my kids love their veggies and have no problem eating just about any of them. But that wasn't by accident or luck, it's been in how we have raised them.

Today (2019) my kids are 13 and 15. They have been vegetarian since birth. They are primarily vegan, because at home I only do vegan cooking and most grocery items I buy are vegan. They do eat pizza here and there, as well as something like cake, or when they eat out they may get something that is vegetarian, but not vegan. But in their lifetime I've never bought cow's milk and never bought eggs, so those products are not in our home. How did I get them to eat and love all the plant based foods? let me explain...

I'm going to be completely honest in saying that little kids can't make their own foods or do the shopping, so their eating habits are largely enabled by their parents. Some parents don't like to hear that, but it's the truth. If a child will only eat crackers all day, that's not the child's fault, that's the parents fault for allowing such a thing. But you can change it, especially if they are still toddlers! Granted, there are children (especially those with special needs) who have issues with things like textures. I get that, but there are plenty of other foods out there, so skip that food item and keep going.

Here are some things I did to help encourage my kids to love their veggies:

With every dinner I make, I serve the main entree, along with at least one vegetable and one fruit. I serve fruit with every meal. Whether it's a fruit salad I make fresh, or I add some berries or cut up fruit to the plate, fruit is a daily part of our dinner. It adds many of the same nutrients that you can get from veggies. My kids eat most vegetables. As I write this I am trying to think of a vegetable they outright don't like and won't eat and I can't think of one. At their age now, I would let them skip something they didn't like, because I know they are developed enough to not be turning away just because it's a vegetable. They love veggies, so if they turn something away I know they have tried it and just didn't like it (even after 20 tries).

If you are adopting this diet and lifestyle due to ethical reasons, you can help strengthen the commitment to it by helping kids make a connection to animals. This will help them to see that they are not food, they are beings. Show them movies, read them books, and talk about the importance of being kind to animals and reducing contribution to animal cruelty through our lifestyle choices.