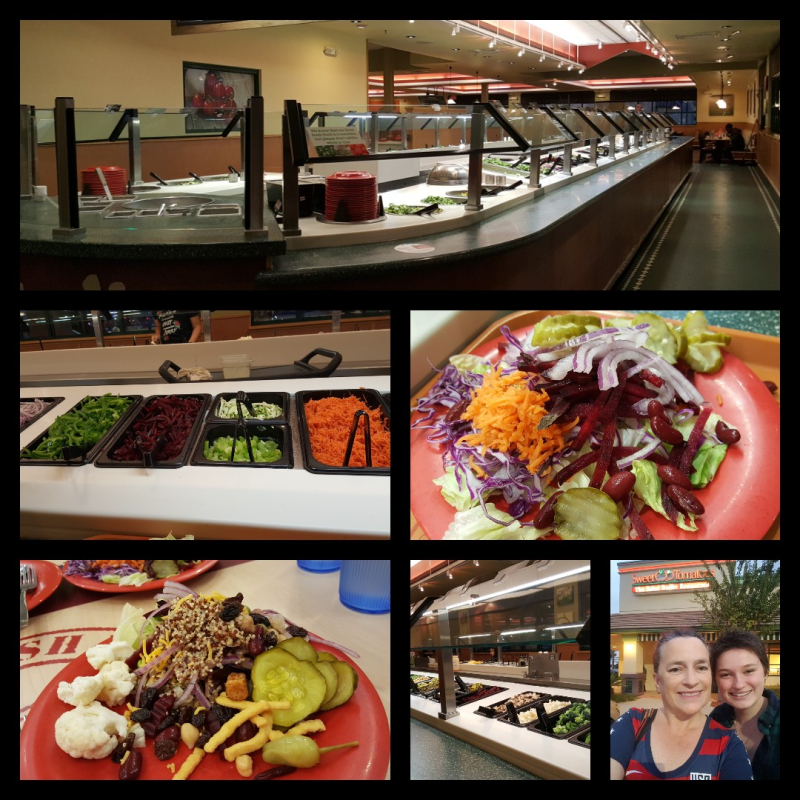 This week, my daughter and I were on our way to the Jay and Silent Bob Reboot in Orlando. I told her she could pick anywhere she wanted to go for dinner before the show. She picked Sweet Tomatoes. She loves salads, and they have a great salad bar there. I've been there many times before, but it had been a while since I stopped in.

Sweet Tomatoes has to have the best salad bar that I've ever been to. There are loads of options to make the perfect salad that is unique to your preferences. We loaded up our plates, making a big salad, and topped it off some one of their many dressings (I went with a balsamic, while she had Italian). It's a bit pricey for a salad bar for us, because we wouldn't get any refills. It was $13 per person, and that's with no drinks. We just had water. If you are someone who will eat a lot and will refill your plate a couple of times then the price isn't bad. We don't eat a lot, while my husband would really get his money's worth (but he wasn't with us). It's also all self serve, so there's no waiting on you. The salad was really good.

They also have a hot bar area. We didn't eat much from there, because we were full after eating the salad. They did have a vegan lentil soup on it, baked potatoes (sweet and regular), and pasta. They also had a fruit bar and some desserts. I don't know if any desserts were vegan, however, because I never went to look them. Vegans can make a great salad here, as well as get a few items from the hot bar, creating a good meal. Sweet Tomatoes has locations around the country, and they are a vegan friendly place. Two thumbs up!