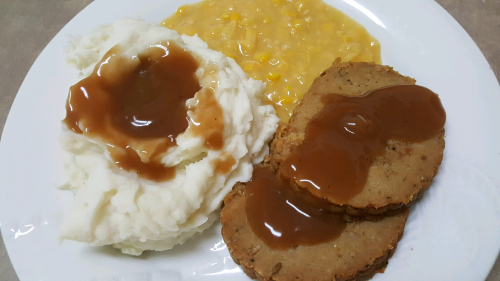 For years, I would buy vegan gravy packets when I needed gravy for something I was serving. Once in a while I would find a vegan gravy recipe online and try it as well. But nothing is as simple as making the homemade vegan gravy that my sister told me how to make. It's how she has made gravy for years. Now it's how I make it as well. This is simple and you most likely always have everything on hand to make it.

In a sauce pan, melt together the flour and vegan butter. Add in the broth, stir, and heat over a low heat to allow it to thicken.  Use a small whisk if you feel any clumps, so you can easily get the clumps out. If you don't have a small whisk, use a spoon or fork to break them up. That's it, it's that easy! This recipe makes around one cup of gravy. If you need more, adjust it accordingly. At times I only make one cup, other times I double it to make two cups. It depends on what I'm serving and how many people will be eating.

When it comes to what broth you use, opt for any vegan broth. You can use Better Than Bullion, bullion cubes, homemade broth, etc. The broth you use will change up the flavor of gravy  you are making. You can make a veggie gravy, a brown gravy, a no-chicken gravy, etc. This vegan gravy recipe is super easy, it tastes great, and I always have everything on hand that I need to make it. Can't beat that. Thank you to my non-veg sister for this great recipe!