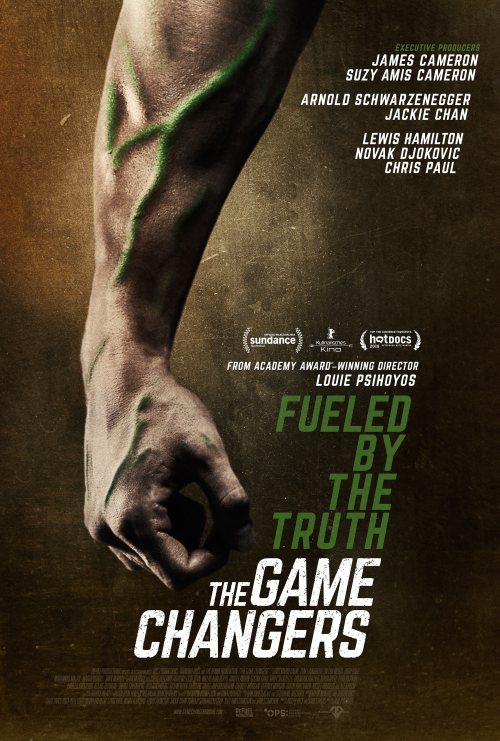 I was really excited when I first saw the movie trailer for the documentary called "The Game Changers." I have some plant based athletes in my home and thought this would be great. My husband, who has been vegetarian (primarily vegan) for the last 24 years, said to me about a decade ago that many people think vegetarian or vegan men are weak. They feel it's not masculine to have a diet that excludes meat. We knew that was a stereotype and myth, but it bothered him. He's strong, in good shape, and an athlete. I have noticed in the last couple of years, with more athletes adopting plant based diets, that myth is being shattered. Increasingly, it's the image is changing and it's becoming seen as manly to be a plant eater. We are thrilled!

This documentary will do a lot more to help shatter the myth. It shows just how strong plant eating people are, both men and women. It shows the benefits and advantage that plant based athletes have by eating a plant based diet. Not only do they have a great variety of athletes that are interviewed and showing their strength as plant eaters, but it also delves into the science behind what type of food goes into our bodies, and how it impacts athletic performance.

I loved seeing Scott Jurek in this movie and clips of his record-setting run on the Appalachian Trail. I reviewed his book of the account of that record a while ago, and I've read two other books of his. It was cool to see the video footage clips about a book that we read. He is an amazing athlete that never ceases to impress my husband and I, and he's a vegan. He has set incredible records all on a plant based diet. It was really interesting to see the other people in the movie as well, including a women who went to the Olympics at age 39 after going plant based, the strongest man in the world setting a weight carrying record, and a man who is in his 60s who is in incredible shape.

My husband runs 20 miles per week, I'm a runner (only around 9 miles per week), and my son plays travel soccer. Before every game I always feed him a good vegan meal of something like soy yogurt or acai mixed with banana, topped lots of berries and granola (an acai bowl). Between games I give him fruit, healthy granola bars, or something like a bean burrito. I had him watch this movie with us, and he saw what eating that healthy plant based food does for his game, as well as recovery. He was really impressed and I know he appreciates now how that plant based food contributes to him being the great athlete that he is, even at his young age of 13. (By the way, my kids are 13 and 15 now and have been vegetarian/primarily vegan since birth).

The strongest animals on the planet are plant based. Some of the best athletes in the world are, too. This is a fantastic movie that was interesting, informative and well done. I highly recommend checking it out, especially if you are an athlete, aspire to be one, or if you are raising one (like I am). It's currently on Netflix, and you can watch it on iTunes. Watch the movie, eat the plants, improve your athletic performance (and health). Learn more about the movie on their website here. We loved The Game Changers!