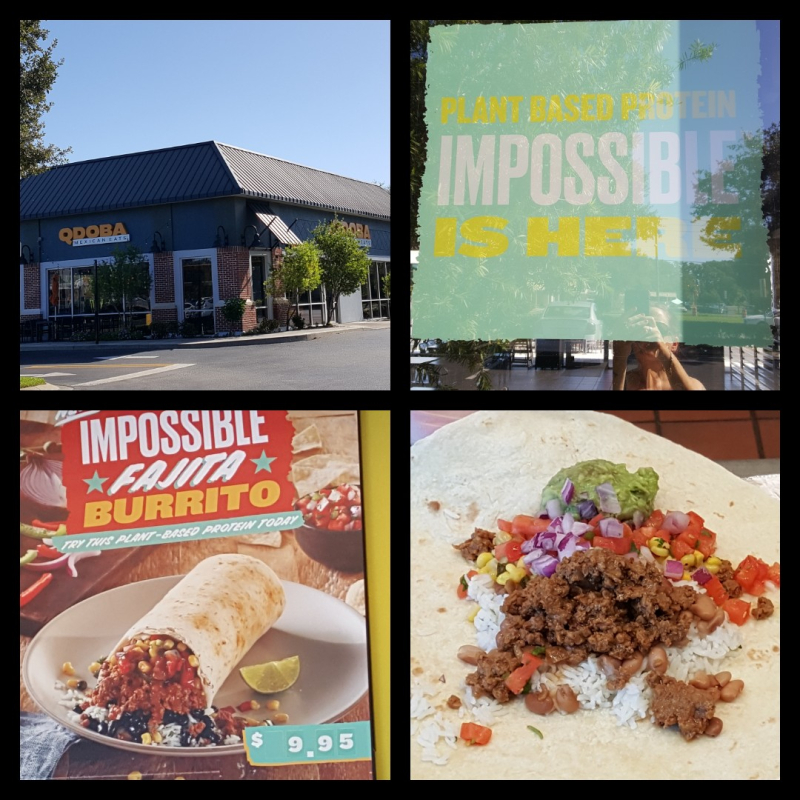 Today, we stopped by the QDoba in Sanford, Florida for lunch. We were in the area for the Orlando City Youth Soccer Tournament and were in between games. QDoba is a national chain restaurant that serves Mexican style food. We hadn't been to a QDoba in years, because the closest one to is is around 45 minutes away, so we decided to stop in. I was surprised to see that they offer Impossible Plant Based Protein options now.

My son ordered vegetarian nachos. He didn't want any Impossible Protein, he opted for the beans. My husband and I both opted for burritos that had that had Impossible meatless protein. My husband got the fajita burrito, while I got just a straight burrito with it. Mine is pictured before they rolled it, which has the Impossible meatless protein, rice, beans, onion, tomatoes, and guacamole (it was vegan, as was my husband's). I thought by ordering a straight burrito with the Impossible protein that it would be chapter than the fajita one, which was listed as $10. But as it turns out, they charged us both the same price, saying that it goes by what type of protein you choose. So I should have went ahead and got the fajita veggies in there, too. Not that I could have eaten more. One of my problems with places like this is that the burritos are too big for me. I wish they offered them in two sizes, so I could get a smaller one and my husband could get one the size of his head and feel satisfied.

Anyway, the burritos tasted really good! I ate about 75% of mine (and was stuffed), and my husband ate all of his and finished the rest of mine. We both really liked it a lot. My son liked the nachos, too. Everything tasted good, although we did feel it was a tad expensive. If I went often I'd look for ways to make it a little cheaper. You can download their app and earn rewards when you make purchases, which may be something you want to do if you go often enough. Overall though, the QDoba Impossible burritos were good!

Vegan at QDoba:
At QDoba, you can order vegan tacos, burritos, bowl, or taco salad. You can opt for the Impossible meatless protein, or you can get black or pinto beans, or a combination of beans and Impossible (as we did). Many of their toppings that you choose from are vegan, as is their tortilla soup. Their fajita and grilled vegetables are vegan, as are most of the salsas they offer.