Book review: Emperors of the Deep 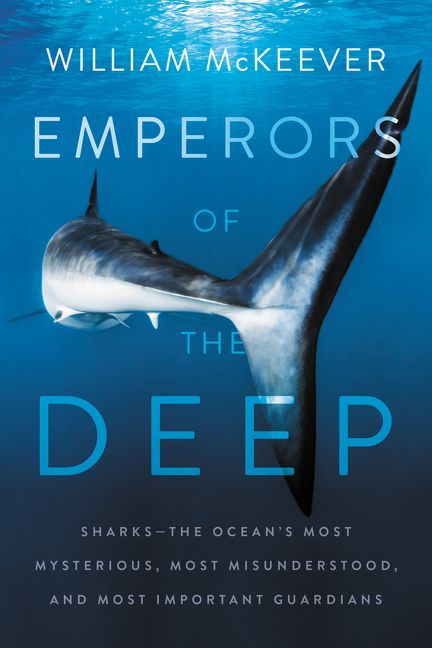 I'm an avid reader and love to books about various animals or environmental topics. Recently, while strolling the new book aisle in my local library, I came across the book called "Emperors of the Deep," by William McKeever. I was immediately interested in the book. Living on the border of New Smyrna Beach, Florida, which is the shark bite capital of the world, I hear how afraid of sharks people are. Being a Florida Master Naturalist, I also know that the fear is unnecessary, and that people fear the wrong animals. I checked the book out and decided to move it up my "to read" pile to be the next book I started.

The book is filled with great information on sharks, commercial fishing practices, shark tournaments, and how our oceans are being destroyed. Some of the information I was already familiar with, but I was introduced to some things that were new as well. There was one scene in this book that made me cry, as the author described how a shark was being caught and killed for a tournament. There is some really important information in this book, including:

I cannot imagine anyone reading this book who doesn't feel compelled to do something after they finish reading. As a vegetarian, I am happy to say I've never bought tuna in my entire life, nor have I in my adult life contributed to the problems with overfishing and those leading to tons of animals being killed by bycatch each year (I've spent nearly all my adult life vegetarian, primarily vegan, and even before that I never liked eating any type of fish or sea animals). I can't imagine a fish or tuna eater reading this book to ever again look at those products in the store in the same way. Those who buy tuna or eat fish must, if they have any sense of compassion for both animals and humans, make changes for the good after finishing this book.

I love to write down quotes that I like from books. Here are two I loved from this one:

"The love for all living creatures is the most notable attribute of man." - Darwin

"Society's lack of compassion for our fellow people and for animals leads to an ocean where sharks are dying by the  millions and slaves are being abused by the thousands. The connection is basic: a disregard for life itself."

I thought this book was great and I highly recommend reading it. I'm happy with McKeever's passion about changing the image of sharks and in saving our oceans in the process. I think he's written a great book that is filled with crucial information that everyone, fish eater and vegetarian alike, need to know. Two thumbs up for Emperors of the Deep!