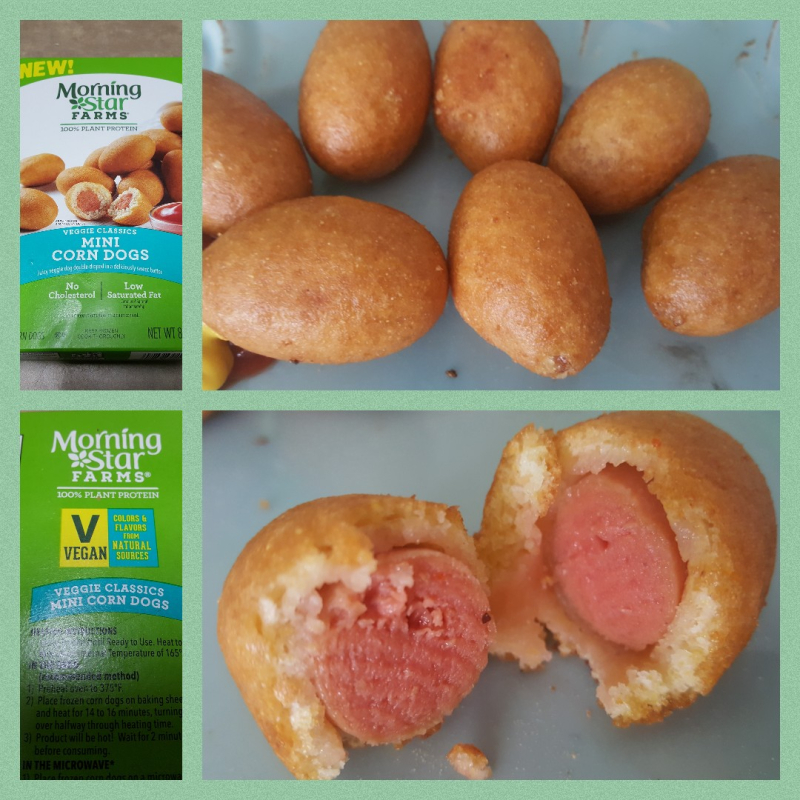 I've always been a fan of Morningstar Farms products, but I don't buy them much, because they are not vegan. However, they are in the process of making their products vegan, which is really enticing. I've had their veggie corn dogs when they were not vegan and they were good. This week, I saw they are now vegan and in stores. I was excited to give them a try and see how the vegan version compares.

I bought a couple of boxes of the Morningstar Farms mini corn dogs, because they were on sale. I ended up eating them on two different days for lunch, sharing them with my husband. Just pop them into the oven and within minutes they are ready to go. They were delicious! I have to say that I think the vegan corn dogs taste better than the vegetarian ones did. They were really good. My husband liked them as well.

I will buy these again for sure. While they are not health food, so I won't be eating them often, they are a nice treat. The kids love them, too. These make for an easy lunch for them, whether at home or at school. To pack them for a school lunch, just make them in oven as the package directs, let them sit and cool for a few minutes, then wrap them in foil. Put them in the lunchbox with a cool pack and a little container of ketchup (and mustard if they like that). My kids have taken them to school for lunch and they always like it.

Two thumbs up for these vegan corn dogs, which are great. And kudos to Morningstar Farms for transitioning their product line to be vegan!

Update: Just days later, we bought their regular size vegan corn dogs. Yum! Just as delicious! Whether going with the mini corn dogs or the regular size, these are great.