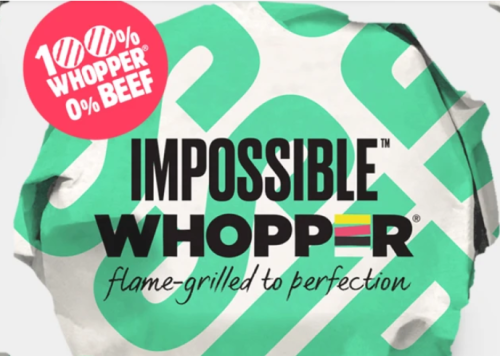 This is a question that many vegans and vegetarians are asking, especially since the Impossible Burger debuted at over 7,000 Burger King locations around the nation. It's a good question and one worth evaluating. Some vegans and vegetarians are asking this question because the heme ingredient in the Impossible Burger was tested on animals. Vegans in general avoid things that have been tested on animals, if they can help it.

So, should vegans support Impossible Burger, even though they did animal testing to ensure their product was safe for human consumption? Yes, I believe they should. I also abhor animal testing, so I understand where the concern is coming from. However, the animals are the ones that will lose if people boycott the Impossible Burger over animal testing. The Impossible Burger is going to appeal to millions of meat-eating consumers, who are open to the idea of trying something healthier, different, and vegetarian or vegan. These vegan products are not becoming mainstream in recent years because of vegans and vegetarians. We make up only 5% of the country's population. These products are becoming mainstream because increasingly there are meat eaters who are willing to purchase them. That's fantastic! Every time they order an Impossible Burger, rather than a meat-based burger it's a win-win for the animals and environment.

The animal testing is akin to taking two steps forward, one step back. The good thing is that you are still one step forward. It may not be a perfect method for bringing the plant based burger to market, but in the long run the Impossible Burger has the potential to save a lot of animals. Plus, this has opened the door for other companies who want to use the heme to create vegan products, thus bringing more plant based products to the market. The FDA has said that it is safe for human consumption, following the Impossible Burger tests. Does that mean that vegans and vegetarians will avoid all future products that are made with heme? After all, it was Impossible Burger who opened the door for those other products to start being made with heme.

By supporting Impossible Burger people will ultimately save more animals. Although nobody likes the animal testing that was done to begin with, in the long run this product will do far more good for the animals. Therefore, I believe it should be supported. Granted, it may not be something that you want to eat on a regular basis, but if you care about animals and want to reduce the consumption of them, you should really be grateful this product exists and that Burger King has put them on the menu.

Having said all that, I do understand why some vegans would want to boycott the Impossible Burger. Vegans try to avoid products tested on animals, so I understand this making for an ethical dilemma and that they may ultimately avoid eating it. Technically speaking, products that are tested on animals that can easily be avoided by vegans are avoided. Therefore it makes sense that a vegan would have concerns over this dilemma or want to boycott the burger.  I don't think there is anything wrong with a vegan taking a stand against eating it due to the animal testing that was involved. However, based on that principal, they will also need to avoid future products made with heme. That's going to get tricky and exhausting and I'm not sure who that would be helping in the long run. Why would they need to do that? Because heme is only going to become more widely  used because it has been tested on animals and deemed safe for human consumption. So you will need to boycott all those products that come out that are made with heme, so you are not being a hypocrite.

The good news for the animals is that those who will boycott the Impossible Burger due to animal testing make up such a small portion of the country, that it will not make or break the success of the company or product. This is good, because in the long run the company is going to save a lot of animals. Plus, vegans would opt to eat something else, so the animals are saved anyway, unlike if a meat eater boycotted the Impossible Burger, and chose to eat a meat burger instead.

Whether or not you consume the Impossible Burger is an individual decision. Some people may avoid it due to ethical reasons, and still others may avoid it to opt for something healthier, not processed, or that does not contain GMO ingredients. Ultimately, the choice is yours to make and there is no right or wrong when when it comes to whether or not vegans should eat the Impossible Burger. Everyone has to do what they are comfortable with. I can see and understand the dilemma on both sides of the issue. It's important to note that the Impossible Burger (and Beyond Burger) is not marketed to vegetarians and vegans. We are not their target market. Those products are made for meat eaters, in an effort to get them to reduce the amount of meat they eat. So even if vegetarians and vegans never buy one of them, I still hope they sell a lot in all honesty. Each time meat eaters opt for one of those burgers, rather than a meat-based one, it's a win-win for the animals and planet.

To learn how to order your Impossible Burger vegan, click here.