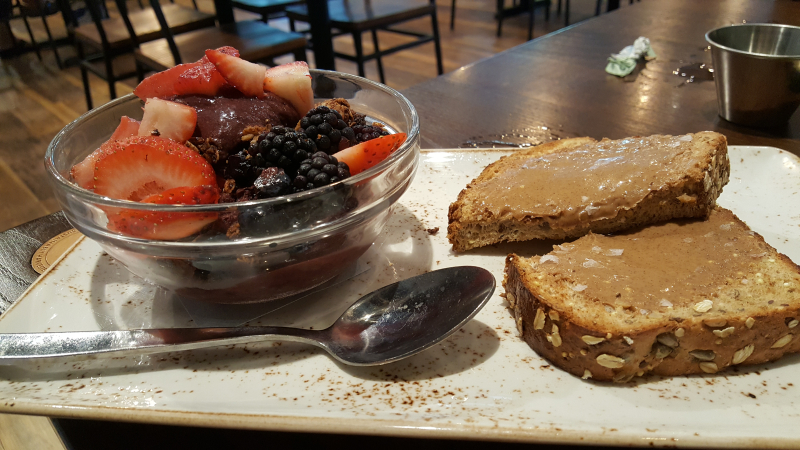 A First Watch restaurant opened up near me within the last year, but I hadn't yet been there to check it out. Then this week, a friend wanted to meet for breakfast and she suggested going there. I checked out their menu to see if there was anything I would eat, and I was pleasantly surprised. So we met there and I got a chance to check it out.

First Watch is a chain that has numerous locations around Florida. We went to the one located in Port Orange, Florida. I was really surprised when I walked inside at how nice the restaurant was. I didn't expect that from the outside, as it just looked kind of plain. But on the inside it was nice and I liked the atmosphere.

They have a regular menu throughout the year, and they also have seasonal specials. I opted for the triple berry acai bowl. There were other dishes I was interested in trying, but the triple berry acia bowl was on the seasonal menu, which means it won't be there past summer, so I had to try it then. I love acia bowls and this one did not disappoint. The acia bowl has organic acai, topped with fresh strawberries, blackberries, blueberries and our housemade granola. Served with whole grain artisan toast topped with almond butter and Maldon sea salt. This breakfast at First Watch was vegan.

The waitress set it down and it looked great! The acai was a bit frozen, but as I ate it continued to melt and it mixed in with the berries. It was so delicious! I ate every bit of it and wanted to lick the bowl afterward. I also loved having the toast with almond butter served with it. Being able to go back and forth from the cold acai bowl to the toast was great.

First Watch surprised me at how much I really liked the atmosphere and the food. I'll will surely go back. I'd like to try their coconut chia seed pudding bowl, and their market veg sandwich. Two thumbs up for First Watch, their vegan acai bowl was great!

First Watch offers the vegan acai bowl, and they have a vegan coconut chia seed pudding bowl (called the AM Superfoods Bowl). They offer a market veg sandwich that you can have made vegan, and they offer a avocado toast (although it's served with a side of eggs, so ask for a substitution to make it vegan). For side items, they offer vegetable soup, lemon dressed greens, and fruit.