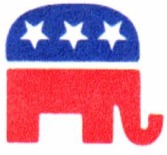 Back in 2009, I wrote a post about being a vegetarian Republican. In 2012, I wrote about animal rights beliefs between Democrats and Republicans. Well, I came across some new research this evening regarding political leanings and being vegetarian or vegan. However, I find the research flawed, and I'll explain why.

The study was published in the July 2019 issue of the journal called Ecology of Food and Nutrition. Researchers wanted to get a sense of how vegetarians vote. They wanted to see if they tend to vote more liberal or conservative. For their study, they polled over 1200 college undergraduates to ask them about their diet and voting habits.

What they found, a big surprise here, was that the vegetarians and semi-vegetarians tend to vote more liberal and don't vote for President Trump. Meanwhile, their meat eating counterparts are more conservative and approving of President Trump.

While I don't argue the fact that more vegetarians are liberal, I think their research was skewed in the first place by polling undergraduate students. I think if they removed the dietary aspects of this research they would also find that most young people tend to vote liberal and be less approving of President Trump. What would happen if they polled a group of vegetarians who were all over the age of 40? My guess is they would find the gap between who votes liberal and conservative would shrink some.

I'm a conservative vegetarian, I vote Republican, and I voted for President Trump (although not in the primary). I know other vegetarians and vegans who are also conservative, vote Republican, and support President Trump. However, some try to be quiet about it, because there is a stereotype that vegetarians are liberal. They keep it under wraps so they are not attacked by their fellow vegetarians and vegans. I don't worry about whether or not they like who I vote for, so I don't hold back from sharing my thoughts.

Trust me when I say that vegetarian Republicans exist. I'm one, I'm marred to one, and I have friends who vegetarian and vegan Republicans, too! They may be a quieter group, but they are there.

I'm curious if you were able to get access to the article itself? Often these types of studies will control for age and other factors. Typically they will also mention the limitations of their research. The article is behind a paywall for me, so I couldn't really judge the merit of the study. I suspect that you are right, that if you had a larger age gap, the differences wouldn't be so stark.

While there might be more vegans who align with liberal politics, there are plenty of vegan conservatives. This PEW research (https://news.gallup.com/poll/238328/snapshot-few-americans-vegetarian-vegan.aspx) suggests that 2% of Americans they polled consider themselves vegans (versus 5% liberal).

I'm happy to see so many more vegans, regardless of their political affiliation.

No, I was not able to review the full study. But just them taking the sample of only college students seemed off to me. Most college students are going to be younger, so their audience was skewed to be more liberal to begin with. I think I have poll you posted. I'm always glad to see more people who are choosing this lifestyle as well. I just want people to know that conservative vegetarians and vegans do exist! ;)