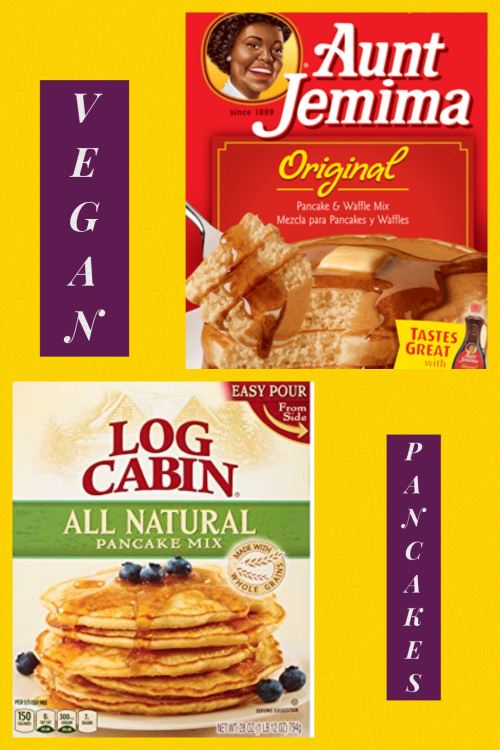 Looking for tasty vegan pancakes? You are in luck!

I buy Log Cabin Natural pancake mix or Aunt Jemima Original pancake mix. Both of them are vegan in the box to begin with, so it's a matter of what you add to it when preparing them. I prepare them using vegan ingredients. So if they call for milk, I use a plant based milk (typically an unsweet original soy or almond milk), and when they call for eggs, I use a vegan substitute. For your vegan substitute for the eggs in store bought pancake mixes, you could use commercial egg replacer, or you can do what I do. I simply use a tablespoon of ground flax seed. That's it, so simple!

When we want pancakes anymore, which is once or twice per month, I use one of the box mixes. I add in my plant based milk, oil, and a tablespoon of ground flax seed. Mix it all together, and I'm ready to go. Although I also like to throw in some blueberries. Then I heat the griddle, spray some Pam olive oil on it or put a little vegan butter on it, and then drop the mix onto the griddle to make the pancakes. Pancakes also freeze well, so you can make extra and freeze them if you have kids who like them for a quick breakfast. Just let them completely cool, then stack them up in a container and put them in the freezer. You can pop them into your microwave to have them ready in no time. The time to heat them depends on how many you are heating up, of course. If you are heating one, try putting it on for 30-45 seconds and check it to see if it's ready.