What are the best vegan cheeses? 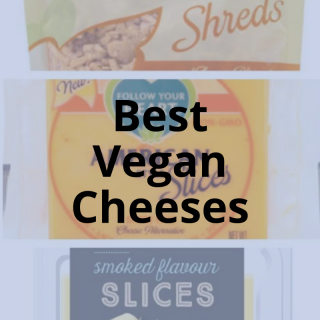 In the last decade there has been some new products come up in the world of vegan cheese. Like everything else, not all vegan cheese is created equal. Many people knew to vegan cheese always ask "what is the best vegan cheese?" Honestly, I think you need to try them yourself, so you can see which ones are your favorite. Not everyone likes the same things. However, I'll share my top vegan cheese picks here and give you my thoughts on some of the popular vegan cheese options that are available.

If you are new to buying vegan cheese, it can be found in the produce area in most mainstream grocery stores. They don't put it by the dairy cheese, it's usually found in a plant based food section in the produce department.

My Favorite Vegan Cheeses (see below for explanations)

Vegan Cream Cheese - Violife (used to love Aldi's Earth Grown, but they no longer carry it)

They were one of the first popular vegan cheeses to hit the mainstream market. There are even numerous restaurants that use their vegan cheeses now. I cringe when I find out a vegan pizza is being made with Daiya cheese. Daiya mozzarella is, in my opinion, subpar. It may be better than nothing, but it leaves a lot to be desired. I have tried to make pizza at home with it and it's not very good. Plus, it says it melts. What does it take to get it to melt? I have found that 30 minutes in a 400 degree oven doesn't make it melt. Do you need a blow torch? Their mozzarella is a bust to me and I stopped purchasing it. I don't even like their frozen pizzas (although my daughter does).

Daiya also makes vegan cream cheese. I have tried them and thought they were pretty good, but they weren't may favorites. The company also makes cheesecakes, which are great.

This is my favorite vegan cheese brand. I really like Violife. Their vegan cream cheese is really good, their cheddar shreds are good for all recipes, and their vegan cheese slices are all really good. I think Violife and Follow Your Heart taste a lot alike. I'm happy to purchase either one of them, and will usually get whichever one is on sale.  Violife shreds works well with mac and cheese, nachos, tacos, etc. Their mozzarella works well for pizzas. It tastes great by itself and on the pizza.

Miyokos mozzarella is really good, but it's too expensive. I made a pizza at home with it before and it tasted great. But the cheese is $9, which is cost prohibitive to me. I purchased it that one time, tried it and liked it, and haven't bought it again because it's too expensive. If you want a great tasting vegan mozzarella, you may want to treat yourself once in a while to the Miyokos one.

Go Veggie makes some vegetarian cheese products and some vegan cheeses. Their vegan mozzarella shreds are good. I like the way they taste. But they melt too much. I've used them for pizza and they literally turn into liquid on the pizza, so I don't use them much. However, I do like the taste. Go Veggie also makes a good vegan parmesan cheese.

They make vegan cream cheese that I have tried. I thought it was okay, not my favorite though. I would rather the shelf space go back to Tofutti.

They make a line of nut cheeses. I've had the shreds, which were good, and my neighbor made me a holiday roll (like a cake roll) with their spreadable cheese in it. That was delicious! Their cheeses are good. Not as easy to find as some of the others, but I do like them.

This product is sold at Walmart. They have slices and shreds in both mozzarrella and cheddar styles. It has a good taste and has worked well for making mac and cheese and pizza.