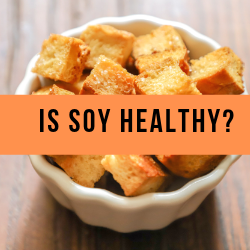 This is a common question, especially among those who go vegetarian, vegan, or plant based. Many people have concerns regarding hormones, GMO soy, etc. There is a lot of misinformation regarding soy out there. It's important to always consider the source when determining whether or not soy is healthy and if you should make it a part of your diet. If you ask "Is soy healthy?" there is no shortage of people who are ready to give their opinions, but their opinions may not be based on fact or scientific research.

Avoid the scare tactics put out by some people and companies, which only serve to make people skeptical about soy. The vast majority of soy that is GMO in the country is fed to livestock. That doesn't mean that there is no GMO soy for human consumption, because there certainly is. But that counters the argument that some people have that soy is all GMO. The store is filled with soy products that clearly state they are non-gmo. Seek out those products and stick to them. This goes for products beyond soy, because you want to avoid GMO products as much as possible, not just when it comes to soy.

Some people have concerns regarding soy in processed foods. That's a legitimate health concern, but not because of the soy. All processed foods are suspected to be unhealthy, not just the ones that contain soy. It's always best to stick with whole foods, so when it comes to soy you should stick with tofu, tempeh, soy milk, edamame, and eat less of things like veggie burgers and veggie dogs, which are processed items that contain soy. It's not the soy itself that makes those things less healthy, it's the fact that it's a processed food. Soy contains all amino acids your body needs, and is a good source of protein, fiber, potassium, magnesium, iron, and copper.

Here are some credible sources and what they say regarding whether or not soy is healthy to consume:

Health professionals recommend eating it in moderation, which is defined as 1-2 servings per day. A serving is roughly 1 cup of soy milk, 1/2 cup cooked soybeans, 1/2 cup of edamame, 1 ounce of soy nuts, or 1/3 cup of tofu. Soy has been consumed by Asian cultures for thousands of years. The people who live the longest in the world, and tend to be the healthiest, are the Okinawans, in Japan. Their diet is largely plant-based (it's estimated that only 2% of their diet is meat/fish/poultry), with the bulk of their diet being sweet potatoes. Plus, they eat soy, such as tofu and miso, every day.

The bottom line is that there is plenty of scientific research backing the idea that soy is healthy for  those who do not have an allergy to it. Soy is a healthy food that appears to have numerous health and protective properties. Making tofu, soymilk, miso, and tempeh a part of your diet is a good idea!