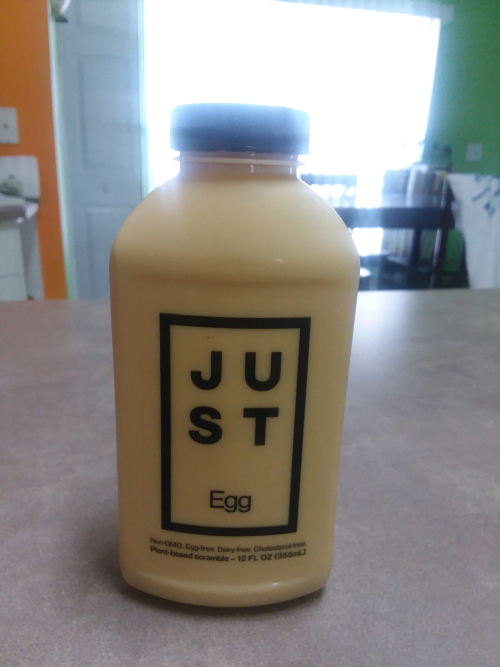 This week, I came across the Just Egg in a couple of places and decided to pick it up to try it out. This morning, we decided to make some Just Egg sandwiches.

I use white Italian bread with some vegan mayo and tomato. I got that ready and then set out to cook the Just Egg. I followed the directions in scrambling it up. I put it into a hot pan that had a little vegan butter. As it sizzled, I added a little salt and pepper. Although I scrambled it up this time around, next time I think I would try to cook it more like a fried egg so that it's flat and not all scrambled. But this served the purpose to try it out. Once it was done I added it to the prepared bread and we tried out our sandwiches. Trying them out were me, my husband, and my daughter. My son didn't want anything to do with trying it.

We all liked it! I think it has the consistency of a scrambled egg. I can't say if it tastes like a scrambled egg, in all honesty, because it's been so many years since I've had one that I don't recall the taste all that well. But I did like it and I'd make it again. It made for a good vegan egg sandwich. I have tried a couple of other vegan egg products and I have to say that this is the best one I've had. I also like the Follow Your Heart vegan egg, but the Just egg is better tasting, smells better, and is easier to use.  I've tried some that have a smell that gagged me (like rotten eggs) and it was a huge turnoff because of that. The first thing I did when I opened this one is smell it to see if it had that offensive smell, like the other vegan egg products I've tried. It didn't, so I was happy about that.

My one concern with this product is the cost. It was around $8 for this little bottle of the Just Egg. To me, that's kind of expensive. According to the company, Just egg is equivalent to 8 medium-size eggs or 6 large-sized eggs. I don't know what the cost of a dozen eggs is in comparison, but the cost of the Just egg is a con to me. With the high cost of this item I can't say that I'll buy it regularly, but I would once in a while. I think the high cost will keep many non vegans from wanting to try this product, whereas if it were more affordable they may give it a shot, which would be a good for the animals, planet, and their health.

Many grocery stores are beginning to sell Just Egg. The product is sold in the egg department, so check your local stores to see if they are carrying it.

UPDATE two weeks later:
I already bought it again! Sooner than I thought I would, but darn it's good! This morning I wanted to try making vegan omelets with it. I had to stop and think about how to make an omelet. I stopped purchasing eggs in 1995, so I had to think about how to go about doing it, but I pulled it off. I sauteed some onions, green peppers, and spinach (I wanted mushrooms, too, but didn't have any on hand). I set that aside and added the vegan egg into the heated pan, which had a little butter in it. I added the sauteed veggies to one side, add in a little salt and pepper, and let it cook a few minutes. Then, I folded it over and cooked both sides until it was a nice golden brown color and nothing looked uncooked.

Wow, we loved it! This was SO good. It honestly tasted just like what eating chicken egg omelets used to taste like decades ago. I was blown away with how good it tasted. I'm afraid that even with this costing a couple of more dollars than I'd like, I'm going to be buying it more often than I originally thought. It is great! The fried Just Egg sandwiches I made were good, but the Just Egg omelet was great! Two thumbs up! See the collage picture below for the Just Egg omelet I made.

Update 8 months later: They have now announced that they are lowering the price of Just Egg (my problem with the product is that it was too expensive). In my local grocery store the price has already been dropped $2 per bottle. Yay! As the price come down this is something we will keep in the house. It makes great omelets, vegan egg sandwiches, and vegan sausage egg muffins (English muffin with vegan sausage, vegan egg, vegan cheese, and jam). We really like it a lot! 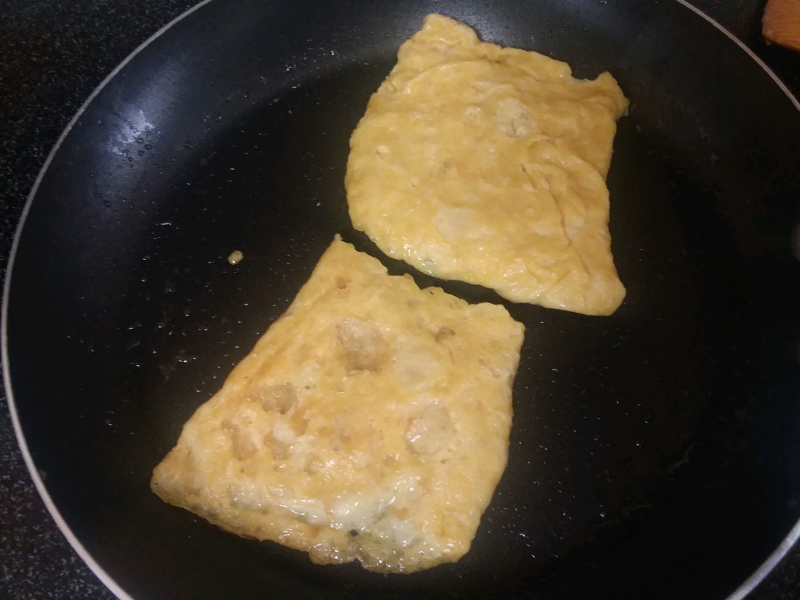 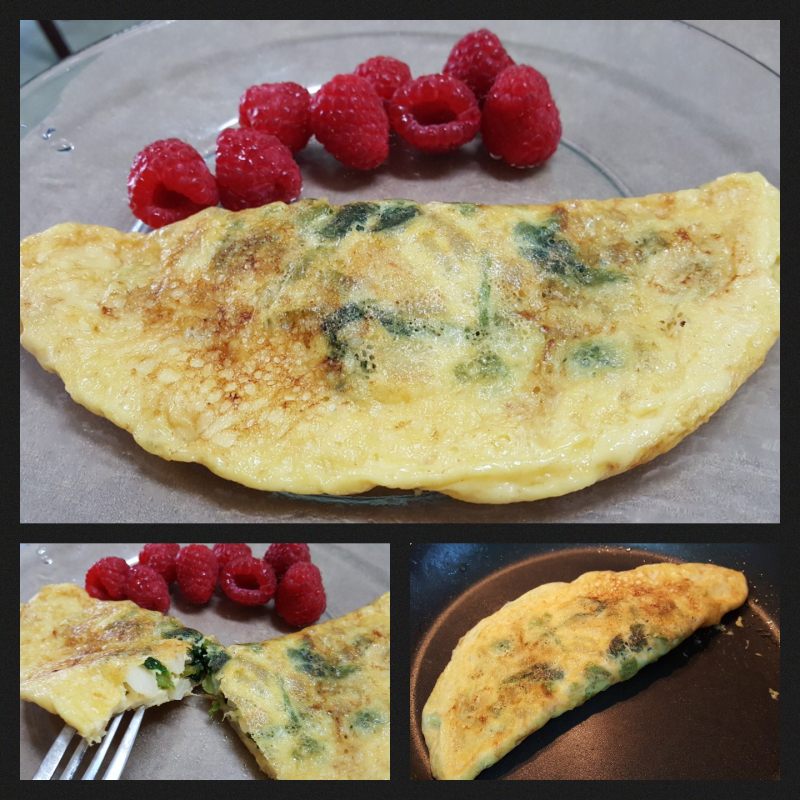