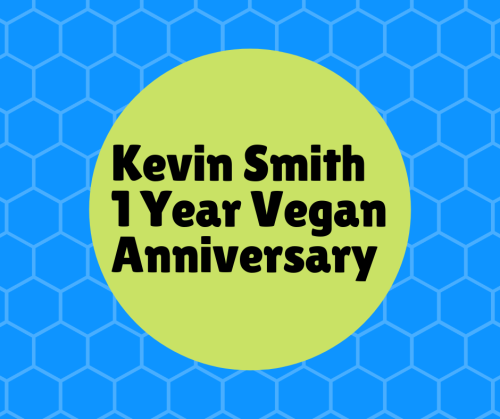 It was just over a year ago now that Kevin Smith (actor/writer/director) had a heart attack and nearly died. As a fan of his movies, I watched the unfolding of his story, hoping for the best. He had decided to adopt a vegan diet to save his life, following that heart attack. Months after he started the vegan diet, I saw him in interviews where he talked about it. He said it was hard to be vegan, that he didn't like it, that he only did it to save his life, etc. But there was a transformation that was taking place.

Here we are now, a year into his veganism, and his attitude has changed, I'm happy to say. Check out the video below, where he speaks more positively about veganism. He now even feels compelled to continue the lifestyle because of compassion for animals. I was really happy to see this video and how he has changed over the last year. He's looking great, his attitude is great, and it's like he's a whole new person. Veganism gave Kevin Smith more than just his life back. It gave him more meaning to his life. I'm also happy to see that he shares this with his daughter. I think the veganism has probably made them even closer, or so it seems.