UPDATE: One week after posting this, Red Robin did add the Impossible Burger to their menu around the country. It comes with cheese and on a non-vegan bun. So if you go there and want it vegan, ask for no cheese or mayo, and have them put it on the ciabatta bun (which is vegan). For years, I liked going to Red Robin for their veggie burger and fries. They used to offer two veggie burgers, one was the Garden Burger (not vegan) and one was the Boca vegan patty. I always liked the Boca vegan patty and their fries. We haven't been there for several months, but tonight my daughter and I went there for dinner. We look at the menu and see that they have changed it. They no longer have those two veggie burgers. Now they offer one veggie burger, which is one that is made by their restaurant. It's a vegan burger, but they don't offer a vegan bun. If you want the mean to be vegan you have to get it on lettuce.

I went with the bun, my daughter went with having it on lettuce. The veggie burgers were served and it was quite a disappointment. The burger, which is made with grains and quinoa, was mushy, burnt, and spicy. Yuck. Neither of us liked it. I forced myself to eat most of my burger, despite not caring for it. My daughter ate two bites and wouldn't eat any more (and she is someone who usually loves veggie burgers).

Two thumbs down for the new in-house vegan veggie burger at Red Robin. We won't be back for that burger again. On a good note, the waiter said that they will soon be adding the Impossible Burger to their menu. Hopefully they can also spring for the vegan bun so that people can have it on a bun, rather than on lettuce if they want the meal to remain vegan. 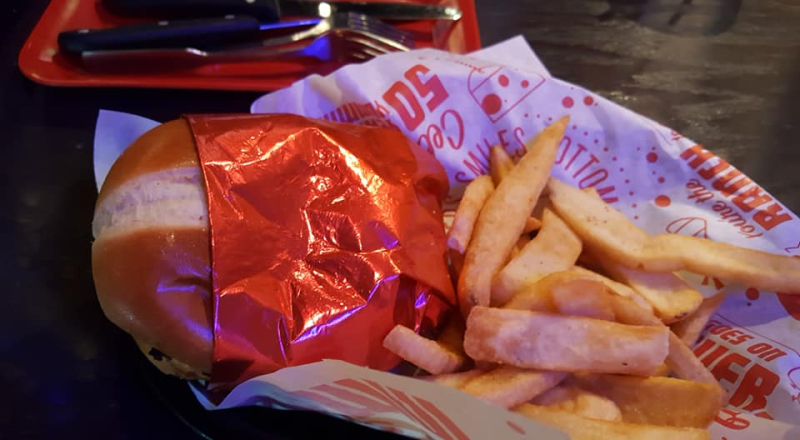