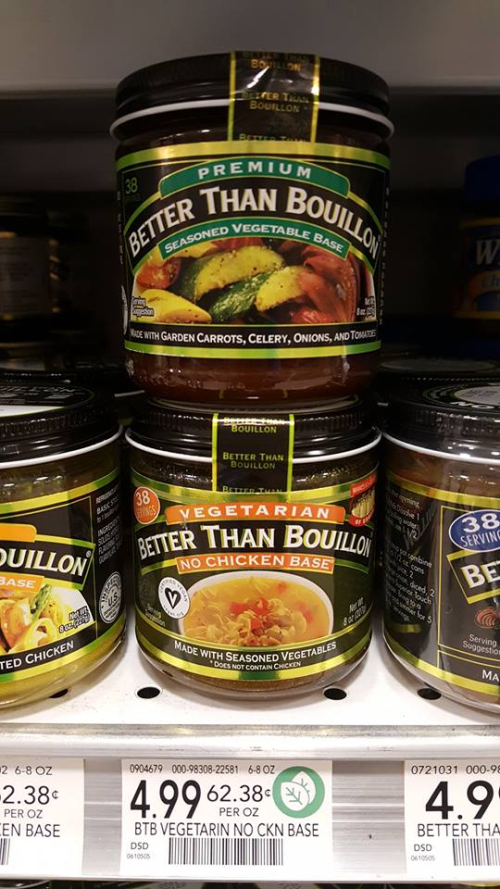 For years, I kept regular vegan bullion cubes on hand in the cupboard, just like most other people. A friend of mine told me about Better Than Bullion, so I decided to give it a try. I wasn't all that impressed, in all honesty. The first jar I bought I used it, but just didn't feel that it made a difference if I used the vegan Better Than Bullion, or if I used the other bullion cubes I had been using for many years.

Then... it grew on me! I bought it again and again, and today I can say that I love having Better Than Bullion on hand. I keep it in the refrigerator all of the time now. I love that I can easily use the amount that I want, it tastes great, and it's a great product. Over time, I've become a big fan of the vegan Better Than Bullion.

For the last two weeks I've been out, and I keep feeling like I need to get it back in the refrigerator. You just never know when you are going to need some, after all. The problem is that some of the stores I was in during that time didn't carry the vegan ones, which was disappointing. This morning, I made a point to stop at Publix to get it, because I know they stock the vegan Better Than Bullion. Usually I get the vegetable one, but today I saw they also had a vegan No Chicken Better Than Bullion. Sweet! I decided to get that one and give it a try.

I feel better this morning knowing that it's in the refrigerator for when I need it. It's the little things in life that keep us going! ;)

If you can't find vegan Better Than Bullion at a store near you, they do sell it on Amazon, but it appears to be more costly through there.