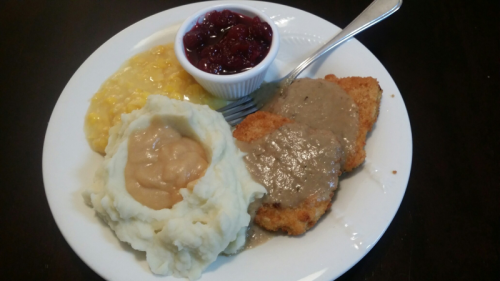 When I went vegetarian back in October of 1995, I was just over a month away from my first Thanksgiving with my new lifestyle. When that first Thanksgiving arrived I didn't know what to make. My husband and I went to our usual family Thanksgiving dinner, toting along a pan of pasta. There were not a lot of options for vegan roasts and other things that there are today. That first year we ate the side dishes and our pasta. Things got better after that when I discovered the Tofurky roast a couple of years later. Today, vegetarians and vegans don't realize how good they have it! There are so many options today, it's fantastic. We still love the Tofurky and have had it for many years. But there are other great options as well now, including the Celebration Roast, gardein turk'y cutlets, the gardein roast, the Tofurky ham, and much more. It's all about finding the one you want to try, whether having a store bought vegan roast or making your own from scratch. Vegan Thanksgiving options abound today!

Here's what we have in a typical vegan Thanksgiving:

What should you do if you are going to a non-vegan Thanksgiving? I've been there and done that many times. First of all, be nice and polite like you would any other time. Don't be the vegan police, as they do more harm than good. Simply prepare a nice vegan Thanksgiving dish or two to take and share with everyone. Eat that, along with the side dishes at the table. This is a great chance to show others how great vegan food tastes, so offer your dishes up to them. It's also a great way to show how simple it is to eat vegan, so make it seem like it's easy, not a daunting or stressful task. Always lead by example, and try to avoid the conversations at the table about why you are vegan. Nobody wants their dinner spoiled with that, so save those conversations for later and only if someone inquires about why you are.

The hardest part on Thanksgiving will scrolling past all the dreadful dead bird photos on social media. I get it, I find it revolting, too. But avoid the urge to get into a debate and just keep scrolling...