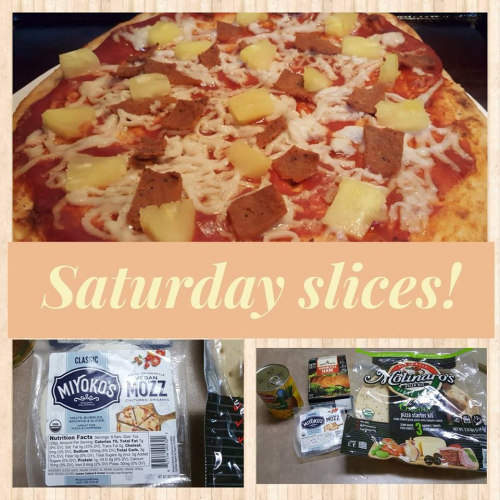 We like to have pizza on Saturday nights for dinner. It's kind of a tradition in our house. I've tried many different vegan cheeses over the years when I make my own vegan pizzas, but until today I hadn't tried Miyoko's brand vegan mozzarella cheese.  I've had people tell me it's really good and that I should try it, but in all honesty I didn't want to put out the $9 to buy it only to be disappointed. Well, today I finally broke down and bought the Miyoko's vegan mozzarella cheese to make vegan pizza at home.

I had previously picked up an organic pizza kit from Aldi, which had three crusts and sauce packs. I decided to make vegan Hawaiian pizzas, so along with the Miyoko's vegan mozzarella, I also picked up a can of pineapple chunks, and Sweet Earth brand Harmless Ham. I put the sauce on the crusts, shredded the cheese onto them, cut the Harmless Ham into pieces and added it, and then added the pineapple chunks. I decided to add some garlic butter sauce to the outside rim of the crust, so I melted a little butter, added in garlic powder, and spread it around the outer pizza crust. The verdict? Yum!

We tasted the Miyoko's vegan mozzarella by itself to see how it was and it was very good. We really liked it! The finished pizza also tasted really good. Everyone liked it. I think it's the best vegan cheese I've had on a pizza (and I've tried a lot of vegan cheeses on pizza over the years).

Two thumbs up for Miyoki's vegan mozzarella, Harmless Ham, the organic pizza crust/sauce kids from Aldi, and making your own vegan Hawaiian pizza. I'll be making these again!