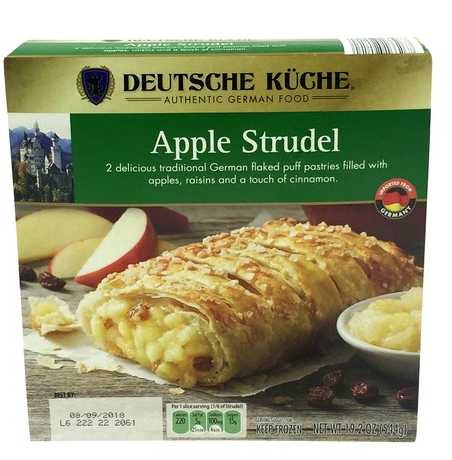 I stopped into Aldi's this week to grab a few things. This strudel in the freezer department caught my eye! They had two kinds (apple and berry). I looked over the ingredients and low and behold, they were vegan! I bought one of each kind and we baked them on separate days this week.

The vegan strudel's at Aldi's come frozen, two to a pack, and it was around $2.50 per box. However, each one is pretty good size, so I cut them in half and one box (two strudel's) became four smaller strudel's. I have a family of four, so that was a nice little vegan dessert on two separate nights. Eating half of one strudel is plenty.

The box said to bake them for 35-40 minutes, but the first time I did that they burned on the top. I scraped the burned areas off and we still ate them. They were good! The next time I made them I only baked them for 30 minutes to avoid the burning. Perfect! They were really good. We liked the apple strudel better than the berry one, but they were both good.

Next time you are by Aldi's check out their freezer department for these vegan strudel's. Two thumbs up for the Deutsche Kuche strudel's!