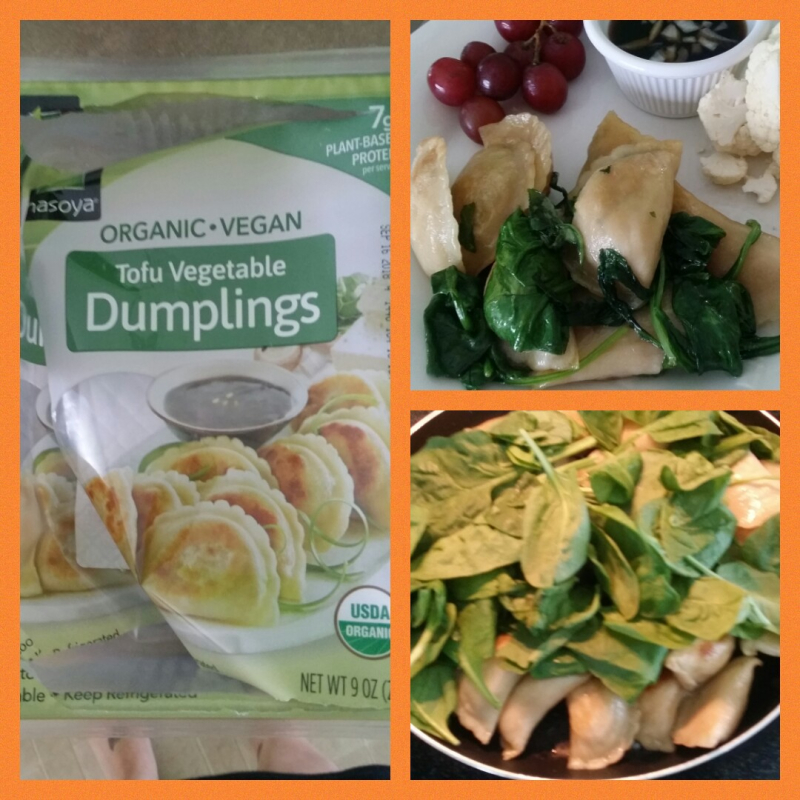 This week while at the grocery store I spotted Nasoya tofu vegetable dumplings. They have probably been there for a long time, but what made them stand out to me was that they were on sale buy one, get one free. That enticed me to give them a try. They are vegan tofu dumplings, organic, and seemed simple enough to cook up. So today we had them for lunch.

I cooked them in some vegan butter. I decided to add in some spinach. I took a bunch of spinach and put it on top of them while cooking, let it wilt, and then mixed it in and I flipped the dumplings over. I decided to make a quick dipping sauce to go with them. For the sauce I just mixed together a little low sodium soy sauce, water, maple syrup, and some finely chopped onion. I served them up with some raw cauliflower (for its cancer fighting properties) and some grapes. It was a quick, tasty and healthy lunch.

My husband and I liked the tofu dumplings. We both thought they were a tad salty (even without dipping them), but we still liked them. We would buy them again. When I make them in the future I would again add the spinach, but I will also add some mushrooms and onions to the pan as well. I think we will probably skip that sauce next time, since it seems salty enough, and either go without a sauce or pick up a sweet and sour dip to use. While we both liked them, the kids were not big fans. My daughter thought they were okay, and my son didn't like them at all. That's okay though, because I can make one package as a lunch for my husband and I. Works out good for us!