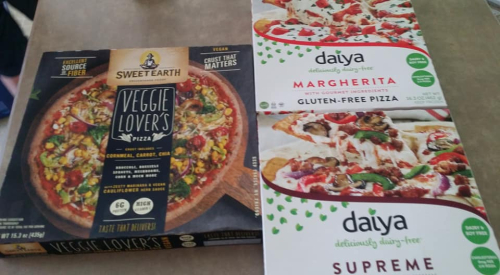 I noticed recently that the Target near my home (in Port Orange, Florida), was carrying a lot of new vegan products. I mean a lot! Among the many new items they were stocking are several vegan frozen pizzas. Tonight, we decided to give them a try! We picked out three of them (hey, they are small and there are four of us). We picked out two vegan frozen pizzas by Daiya, including the margherita and the supreme. We also picked a vegan one made by Sweet Earth called the Veggie Lover's.

These pizzas are ready to be served in about 15 minutes time. Can't beat that! My daughter's favorite is the margherita one by Daiya. The other three of us thought the Daiya ones were just okay. The fact that their crust is gluten free really brings the pizza down quite a bit. The crust has zero flavor. Their vegan frozen pizzas are just okay, not all that good. Then we tried the Sweet Earth Veggie Lovers vegan frozen pizza. Wow!

The Sweet Earth vegan frozen pizza is really good! We loved it and will certainly be buying it again. Good tasting crust, loaded with flavorful veggies, and the creamy vegan cauliflower sauce (the cheese) was really good. Their pizza has a cornmeal crust with chia seeds and carrot, and it's topped with corn, broccoli, mushrooms, marinara, and brussel sprouts. Delicious! This pizza is really good and I'd say one of the best vegan pizzas I've ever tried. Two thumbs up! 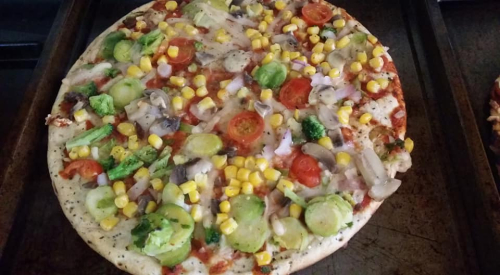