Beyond Burger Review - Cooking them at home #beyondmeat 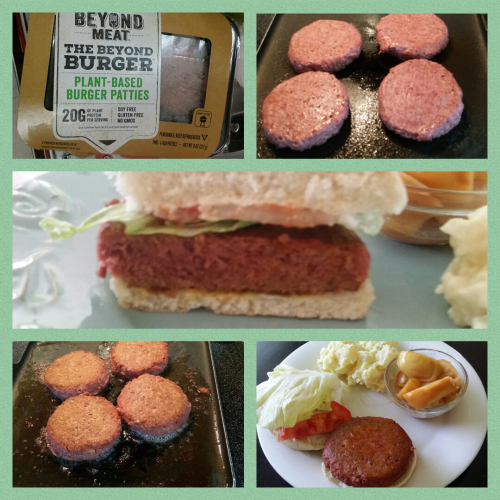 I've had the Beyond Burger while dining out twice now. My husband really wanted to get some to try making at home. It took us a while to find some in stock at a store that carries them near us, because the workers said they sell out right away. The company can't keep up with the demand. This week we were lucky enough to score a couple of packages and we made them tonight. Here's my thoughts on the good, the bad, and the ugly about the Beyond Burger!

Cooking them: When we were cooking them up I was absolutely grossed out. I'm sorry, but they are just too much like actual meat to me. They look like meat, feel like meat, "bleed" like meat as they cook, smell like meat, etc. It was quite gross to me. My husband kept laughing about it all.  He thought it was humorous how they were so much like meat burgers. I wasn't so amused, nor were the kids. They hated the smell and thought it was weird looking as well (they have been vegetarians their whole life). They tasted pretty good though, I will say that. They taste to me what I remember a meat burger tasting like (I didn't give up eating meat burgers because I didn't like the taste, it was all about the animals). Granted, it's been 23 years since I've had a meat burger, but this is what I recall it tasting like, smelling like, looking like, etc. My husband really liked the way it tasted, as did the kids.

What I don't like: In addition to them resembling meat too much for my preferences, I also don't like all of the plastic packaging it comes in. Plus, they are really expensive! They are $12 for four burgers. Ouch, you can get four Gardein veggie burgers for five bucks (and often times on BOGO deals). I also didn't like having to buy them out of the meat department. It's a department that I despise and typically won't even look over at. It's a disgusting department!

What I do like: I absolutely love that Beyond Burger has made these. Not because I want to eat them again, because I'm more likely to stick to other veggie burgers. This one is too meat-like for me. But I am not their target market either, which is why they typically stocked in the meat department. Meat eaters are their target market. So I am thrilled that they made them, because I believe many meat eaters will try and love them. And each time they choose these over a meat burger they are doing good for the animals and planet. It's a win-win situation! I've gotten feedback from numerous meat eaters who have tried them and give them the thumbs up. That makes me very happy! Beyond Burger has created a fantastic product that will appeal to many meat eaters, and that's a good thing.

Bottom line: My husband may want to buy these again to cook at home, and if he does he may will likely be the one cooking them. They were just too meat-like for me. I'd prefer to stick to other brands that are more veggie-burger like. It's easier for me to eat them dining out, because I miss the cooking and preparation steps that I found so gross today. I had to keep reminding myself that they were all plant-based as I cooked and handled them. Overall, I'm super happy they exist, even though they are not really for me!