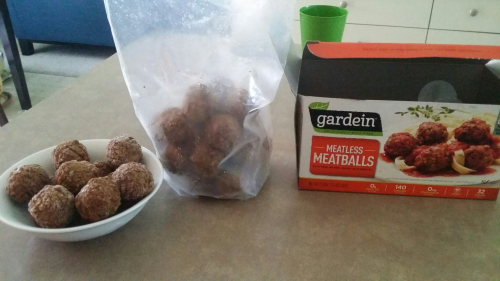 If you are looking for vegan meatballs you are not alone. Many people are on the lookout for a good and tasty vegan meatball. I use the term "meatball" here for search engine purposes, but in our house we tend to call them "vegan wheatballs." For many years, when we lived in Las Vegas, we used to use Nate's vegan meatless meatballs. They were great. I love the Nate's brand. But once I moved to Florida they became harder to find. Now I can find them if I make the hour trek over to Orlando to go to Whole Foods Market, but I can't find them near my house. So I had to find others... and I did!

Gardein has frozen vegan meatballs. They are a little on the spicy side, but they are still good. And here's a great thing- you can get a bulk box of them at BJ's for only $9.99 (pictured above)! Plus, sometimes they have coupons you can use to save even more on them. You can't bet that, other than if you snag a BOGO deal at one of the grocery stores. So what do you do with all the vegan meatballs? I use them with spaghetti, but I also like to make a vegan meatball sandwich. I cook up the meatballs and put them on a nice hoagie, then top it with a little marinara and some sauteed peppers, onions, and mushrooms. Add a little vegan mayonnaise and you have a tasty meal!

The best vegan meatballs I've ever tried were actually homemade ones. I'm friends with Sunshine Carol, from Sunshine Burger, and she made me a big batch of homemade ones before. They were so darn delicious! I wish she would have turned them into a produce that Sunshine Burger would offer up in stores. But until then, I'll keep buying the Gardein ones locally and Nate's when I am near the store that has them. Try the ones you come across in the stores and try making homemade ones, too. See which ones you and your kids like best!