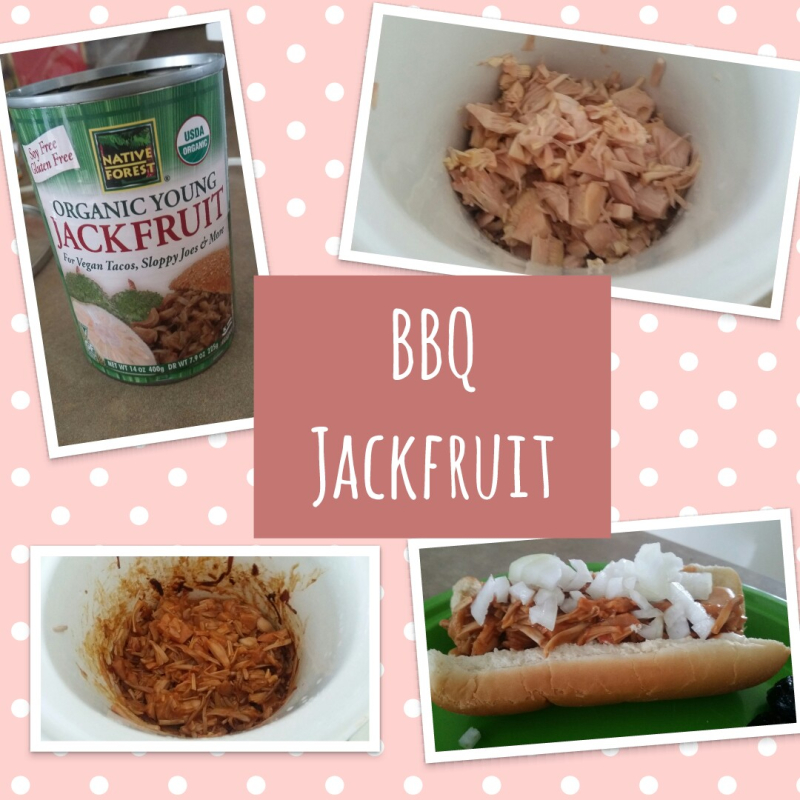 Looking for vegan pulled pork? Well, Vegan BBQ jackfruit has become a hot topic! I've seen it numerous places and people are talking about it. I found it in the store, already prepared. All you had to do was heat it up and eat it. While I had the feeling I'd like the jackfruit itself, the prepared versions were entirely too sweet for me. So it made me want to try making it myself, so that I could ensure it wasn't so darn sweet. That's exactly what I did this week!

Using the canned variety of jackfruit, I decided to make a very quick vegan BBQ jackfruit in the crockpot. I drained and rinsed the jackfruit and put it in the crockpot, along with some BBQ sauce I had on hand and some mustard. I added just a little bit of water to thin out the BBQ sauce some, and let it all cook for 4 hours. Then I dished it up on the only thing I had in the house at the time (a veggie dog bun). I'd love a better, more sophisticated roll for it, but that's what I had on hand, so I went with it!

I really liked it! I thought it was good. It was not too sweet like the prepared versions, it was filling, and tasty. I'd make it again, as it's a quick and tasty vegan lunch. My husband, on the other hand, has come to the conclusion that he just doesn't like jackfruit. He hasn't liked any over the kinds that he's tried at this point.

Jackfruit has vitamins, minerals, fiber, and is good for you. It already has sugar in it, being that it's a fruit, so you really don't need to make it even sweeter by adding more sugar to it. This is an easy, quick, and tasty way to make vegan BBQ jackfruit. Give it a try and see what you think of it!

Some people claim that vegan BBQ jackfruit tastes like pulled pork. Does it? I have NO idea! I haven't eaten meat since 1995, and even then I never in my life liked pork, so I didn't eat things like that. I can't say if it tastes like a vegan pulled pork. I like it for what it is and that works for me! If you are looking for vegan pulled pork or you want to try a simple tasty recipe using jackfruit, give this one a try!

I happened upon your blog and am loving it! I've only been vegetarian for 8 months now but growing up in the south (Virginia) I of course grew up eating meat and lots of pork. I can say confidently that jackfruit bbq is my favorite 'pulled "pork"' option so far. I have loved everything I've used jackfruit for, but we've bought the prepared kinds. I am excited to try just the ripe jackfruit like you and sauce it my own way. But yes, it's a great substitute for any pork options (especially in Mexican food and Asian foods as well as Southern foods). I look forward to reading more on your site!

Hi Emma! Thank you for the feedback. That's good to know so that I can suggest it to people who eat pork and want something that is healthier and more compassionate (and better for the environment). Thanks for reading the blog! ;)