Vegans and vegetarians should order first when dining out 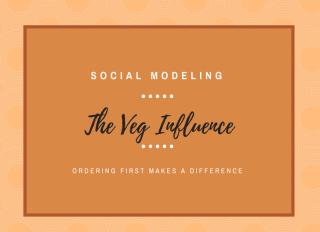 Vegans and vegetarians often dine out with those who are meat eaters. Whether this is through their  work, when out with friends, or when dining out with family members, it's a common scene. Even when not specifically dining out with others, they may be in line ordering in front of meat eaters they don't know. What many people may not be aware of is that the vegetarian or vegan can have an influence on how others behind them order.

Research published in the October 2017 issue of the journal Appetite, focused on this very issue. The researchers wanted to see if what people ordered when dining out was influenced by the person who ordered ahead of them. They tracked lunch orders that were paid for at a cafe and asked the people after paying if their order had been at all influenced by what the person ahead of them ordered, as well as what the relationship was to that person ahead of them.

What they found was that the main dish that people ordered was indeed influenced by what the person ordered ahead of them. And this was at a significantly higher rate than by chance. They found that there was a significant modeling effect, even for those who reported that they were not influenced by the person ordering ahead of them. The researchers concluded that there is a " powerful social influence on eating behaviours."

This is great news for the vegetarian and vegan who is dining out. Whether you know the person ordering behind you or not, what you order for your main dish may have an influence on what they order. This is an incentive to also try to order first if you are in a group dining out.  Your vegetarian or vegan dish will tend to serve as the example.