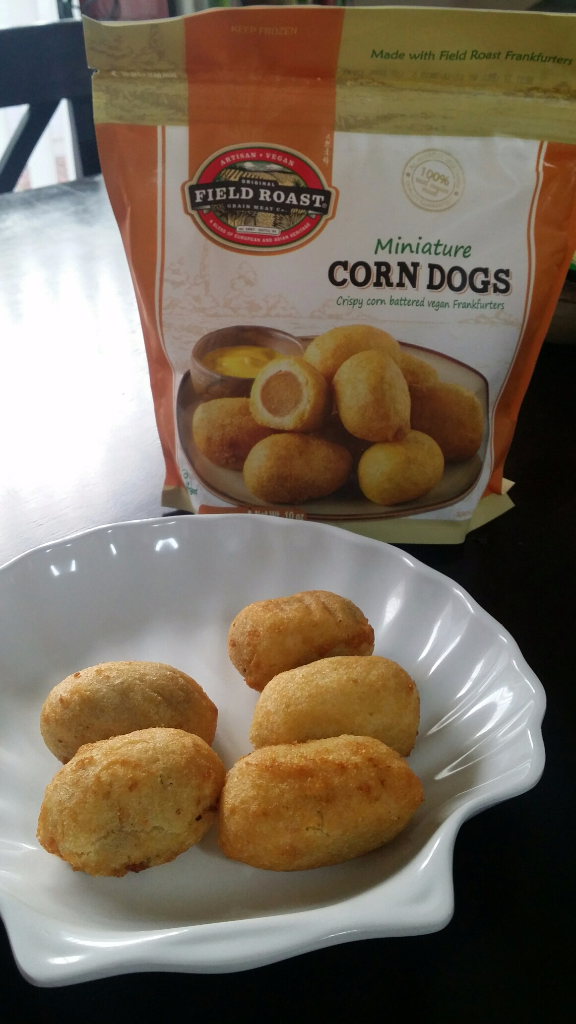 This week when I ran into Walmart I noticed that they had mini corn dogs by Field Roast in the freezer section. They are vegan and made with the Field Roast veggie dogs. I had to buy a couple of bags so that we could give them a try. They were just under $6 per bag, and there were 12 mini vegan corn dogs per bag. We of course had a little ketchup and mustard to dip them into.

Last night, I made them for my daughter and I to try. Popped them into the oven for 20 minutes and they were ready to go. We of course had some ketchup and mustard to dip vegan mini corn dogs into. Each mini vegan corn dog is about two bites and we had six of them each (which was one bag).

My daughter really liked them a lot. She gobbled them up and certainly wants me to buy more. I liked them, but I'm not a big fan of the Field Roast veggie dogs, because they are so dense. Having said that, I would still eat them again, because overall it was pretty good. With my daughter liking them so much I'm thinking I'd buy them for an occasional school lunch for her and my son. I can bake them, wrap them in foil, and give them a small container of ketchup and mustard. It will make for a good lunch for them, alongside some fresh fruit.

I'm happy to see products like this, not only in grocery stores, but in mainstream grocery stores. The options available have come a long, long way!