I know it may not be a high quality food, but I actually liked the taste of canned Spahetti O's. Still, I wanted to make a vegan version to put in my kids' lunchbox for school. Not just vegan, but made of what I'd consider better ingredients. So here is what I made, and everyone tried it. The verdict? Everyone thinks it's really good. They all like it, and they say it's better than any canned version.

I made a big batch of vegan Spaghetti O's with this recipe, but that's because I like to get mine and my husband's lunch out of what I make the kids if I can help it. Making a bowl of this, I can heat it up to put it in their lunch, and I can heat it up later in the day for our own lunch. If you want smaller batches for less people, cut the recipe in half. Cook the pasta according to the package directions. Put the other ingredients in a sauce pan and cook over medium heat, stirring it together. Once you bring it to a boil, put it on simmer until the pasta is ready, stirring occasionally. Mix the drained pasta with the sauce. Serve it up, or put it in your lunchbox hot containers.

It's that easy to make vegan Spaghetti O's, and they taste good! My kids loved them. I'll put it in their lunchbox along with some fresh fruits/veggies, and cookie dessert. They are lighter in color than the canned version, but that's because theirs no ingredients added just for coloring. If you put it in the refrigerator to heat up later, the sauce may absorb some. What I did (I made it the night before to put in their lunch the next day) was to take 1 tablespoon more of tomato paste, mixed with 1/2 cup of water, and I mixed that into the dish. Problem solved! These vegan spaghetti O's are a lighter color than the traditional canned ones, but I'm okay with that.

When it comes to finding O pasta, it took me two stores to find them. If you can't find them, you could use another small type of pasta, such as ditalini, stars, or alphabets. As for tomato sauce, I opt for Muir Glen, because they are organic, and they don't have a BPA lining on their cans. Plus, it tastes good! There are several kinds of vegan parmesan cheese, and most I've tasted are good. If you can't find vegan parmesan, use vegan mozzarella. 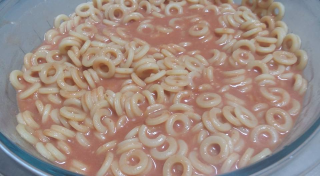