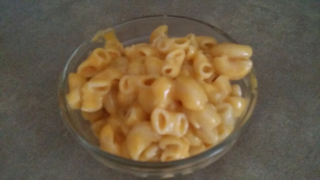 The Daiya boxed vegan mac and cheese is offered at my local store in two flavors. They have the cheddar style and alfredo style. I bought the first box at one store, paying $5 for it, and the second box at another store, paying $4 for it. Kind of steep for a box of mac and cheese, but whatever, I'm used to many prepared vegan foods costing a lot more. Over the course of the week, I made both of them so that the family could try them.

What I like about the new Daiya boxed vegan mac and cheese is that it's easy to prepare, as the cheese sauce is in a packet and you just squeeze it into the pan. The vegan cheese sauce has a good consistency. Once it's made, I think they both have a good presentation. They look tasty!

What I don't like about the vegan Daiya boxed vegan mac and cheese (besides the high price tag) is that it looks a lot better than it tastes. The taste was just "okay." What I really don't like about it is that they both have gluten free pasta. Blech. Give me the tasty gluten-filled noodles please, because the rice pasta is so not desirable! While the alfredo style was better than the cheddar, they both were just okay, and not something I'll end up buying again. Even my kids were not impressed. They love my homemade vegan mac and cheese, but I haven't found one boxed one they like yet (and I try every one of them I come across).

While I give Daiya high marks for effort, I have to ding them on the taste. It leaves a lot to be desired, unfortunately.

You can order it online if you don't have it near you. 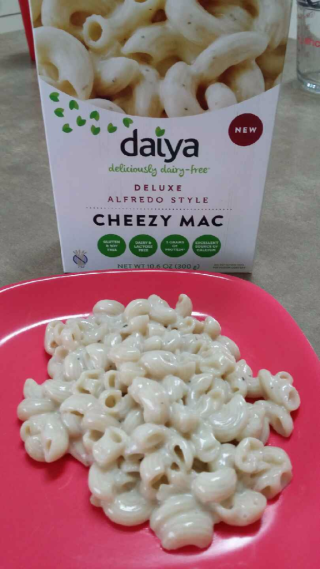