New Subway veggie patty ingredients - made in the Netherlands! 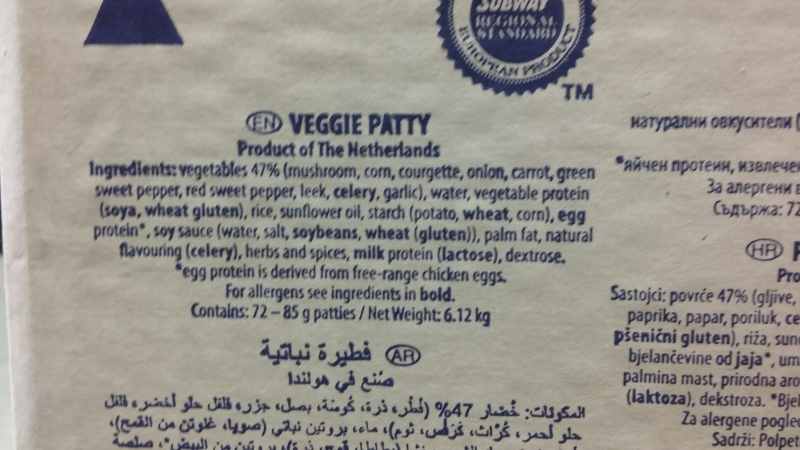 I stopped into Subway this week and heard that they have a new veggie patty. They have replaced the one that they had for years, the Vegimax patty (which was not vegan). The new one is not vegan either. I asked if I could see the box they came in so that I could snap a photo of the ingredients. The sandwich artists showed it to me and above you can see the ingredient list for the new veggie patty at Subway.

I'm not surprised that the new Subway patty ingredient list is not vegan, because their last one wasn't vegan either. What I did find surprising was that it is a product of the Netherlands. Are you kidding me? We have veggie patties all over America, why does Subway feel the need to important one from the Netherlands, traveling roughly 4,600 miles to get here? It's a veggie patty with a huge traveling foot print! Ouch!

The new Subway veggie patty ingredient list also states that the egg used comes from free range chickens. Well, while I'm not familiar with the acceptable farming practices in the Netherlands (if that's where the egg came from that was used in the veggie patty), but those who know anything about how these animals are farmed knows that doesn't mean a whole lot. The animals are still kept in dismal conditions and their bodies are used as machines. Once they no longer provide a steady supply of eggs they likely end up on someone's table. Besides, Subway has over 44,000 locations. That's a lot of chickens needed to produce the eggs needed for these ingredients.

Open message to Subway: Please start carrying a vegan patty (and not a black bean one, because those are not good), and please have it be a product of America! We will greatly appreciate and support it. Thank you!