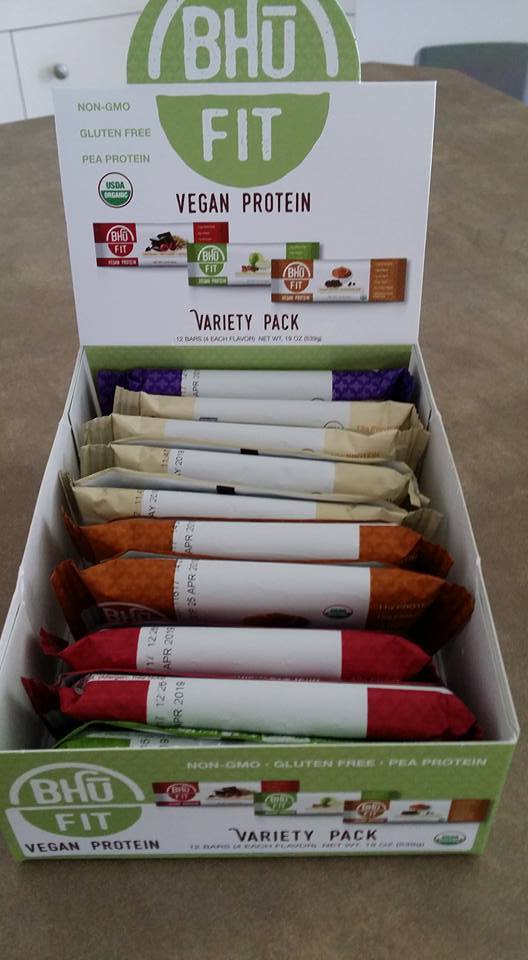 Recently, I received some Bhu Foods vegan protein bars to try. They packaging looked nice and I immediately liked that they were vegan and only contained one gram of sugar (and no fake sugars). There were several kinds in the box, including peanut butter chocolate chip, chocolate tart cherry pistachio, apple chunk cinnamon, and others.

My kids were the first ones to break into the bars to try them, and they were disappointed. It was the fact that they only had one gram of sugar that left them not caring for the vegan bars. But for my husband and I, we both thought they were good. We try to watch the amount of sugar we consume and we both appreciated the fact that they didn't have but one gram per bar. We both really liked the nutritional aspect of the bars, the fact that they were vegan and organic, they offer a good amount of protein per bar, and we liked the way they taste.

My favorite in the batch was the brownie one. It was rich, not sweet at all, and although I felt like I had a chocolately treat it didn't leave me feeling guilty, because it was made with healthier ingredients. My husband's favorite was the apple chunk cinnamon.

Two thumbs up for the BHU Foods

vegan protein bars! I won't be buying them for my kids anytime soon (unless I can get their palate to appreciate the lack of sugar), but my husband and I would be happy to have them around house. If you are looking for a nutritious vegan protein bar, this one has a lot of good things going for it!