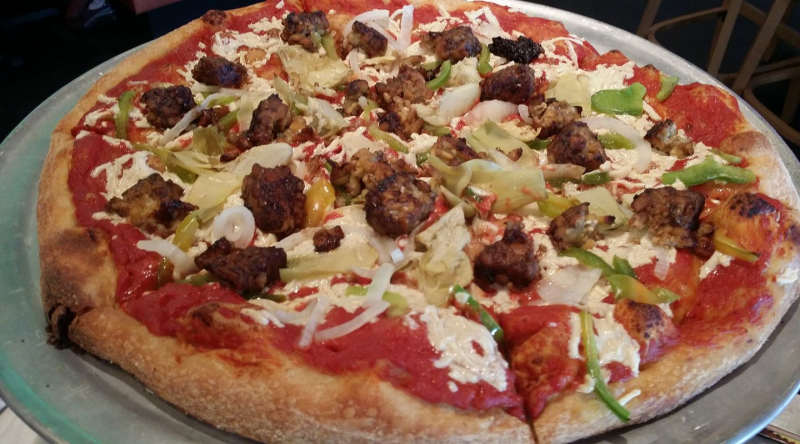 We had a Mellow Mushroom open up  near us just over a year ago. During that time, we've went there numerous times and had their vegan pizza. We've also had some of their hoagies (they have tofu, tempeh, etc.), and we've tried their veggie burger. We like Mellow Mushroom. They are a vegetarian and vegan friendly restaurant, and they happen to have good unsweet iced tea, which is always important to me.

Yesterday, we stopped into Mellow Mushroom again for vegan pizza. The vegan pizza at Mellow Mushroom costs a little more than the non-vegan. For a medium pizza, you pay a $3 charge to swap out the dairy cheese for the vegan one. That's a bit pricey, but it's worth it to be able to get the vegan pizza out once in a while. Ours yesterday had the Daiya cheese, green peppers, onions, and tempeh. We have had it in the past with tofu and other veggies, too.

We both really liked the vegan pizza at Mellow Mushroom. When you order it, be sure to tell them you want it vegan. They will put Daiya cheese on it and leave the butter and parmesan off. My only complaint about their pizza is that the dough is a whole grain one, and it's rough. Seriously, being whole grain it's heavy, thick, and seems like way too much dough. I would much prefer they use white dough, but it's not an option. I've talked to at least a dozen people who have had pizzas there and everyone has the same complaints about the dough. Personally, I would love it if they offered the option of having the whole grain dough or a traditional white dough, because I'd always opt for the latter.

I'm glad they offer vegan pizza at Mellow Mushroom. They have many locations around the country, so it's a nice option to have.