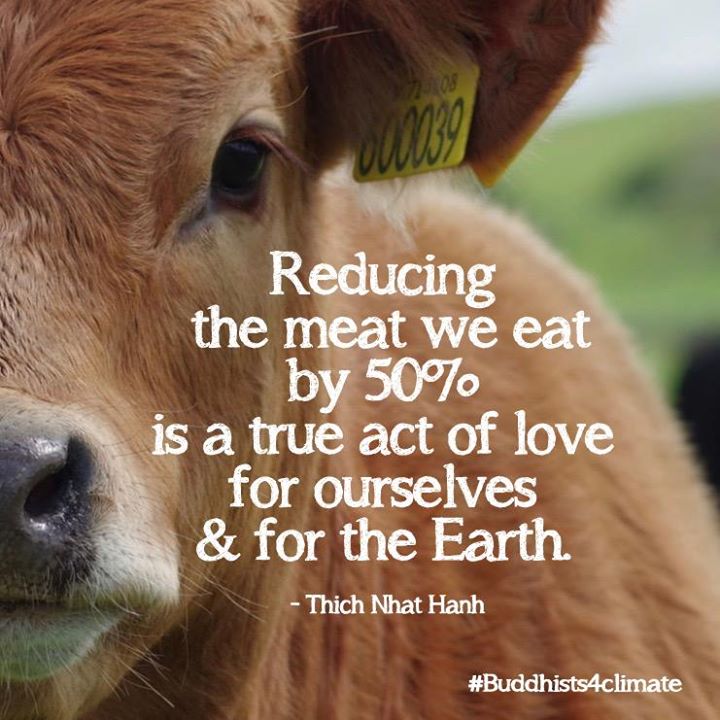 The quote and image above was recently posted on Thich Nhat Hanh's Facebook page here. Not only was there a firestorm of comments, mostly in opposition to the statement, on this page, but there were many other pages that took the issue up as well. Apparently many people were upset that he suggested a 50% reduction in meat consumption, rather than telling people to go vegan. The swath of comments that ensued on his page, as well as many others, was largely driven by the vegan police who put their sirens on and immediately went into action, pulling Thich over, as well as anyone else who tried to say anything in support of his quote (including myself).

First, I must say that I'm a big fan of Thich Nhat Hanh's. I've read 7-8 of his books thus far, and have a goal of eventually reading all of them (there are around 40). I've learned a lot from his books that I've applied to my life and have used to help others. I find him to be an amazing spiritual leader.

In his book "How to Eat," which I reviewed here back in January, he suggested that people go vegan. He laid out the reasons why people should be vegan, and it was a great read. So why in this quote, which came from one of his speeches, does he suggest reducing meat by 50%? Because only 1-2 percent of the country is vegan, depending on which study you get your numbers from, and further research shows that 84 percent of vegetarians go back to eating meat.

Pushing strict veganism all day long will not convert the masses or save a lot of animals. But if you can get a lot of people to cut their consumption in half, then you will make a real difference. When you ask people to go vegan they see it as something as very challenging, even not doable for most. The vegan police have helped to create this notion that it's so difficult. But when you ask someone to reduce their meat consumption, that's something that many of them will feel they can do. That's not so challenging for them to image. But that also doesn't mean they will forever stay at that 50% reduction. It's just a start! They may end up going fully vegetarian or vegan. But even if they never did, that 50% reduction is going to add up to good things.

Is the 50% reduction perfect? Nope. But it's something that is realistic for the masses. People won't immediately discredit it, rather they may actually give it a try. Any reduction in eating animals is a step in the right direction. I will always believe that, and Thich Nhat Hanh will ultimately help to save far more animals with this approach than someone who just preaches strict veganism. If the statistic is true that I've read before that a vegetarian saves 98 animals lives' per year, then cutting meat in half could mean they are saving 50 animals per year. They may feel this route is something they can do for the rest of their lives (or may choose to go completely vegetarian), thus saving 50+ animals per year.

Kudos to Thich for making such a difference in our world. He's a true leader that understands what it means to teach and to lead.