Home About VegBlogger Subscribe by email Disclosure statement Get a product review Contact VegBlogger Follow on Twitter Follow on Facebook Daytona Beach Vegan Food Guide Vegan Resources Page
My two cents on the uproar over the killing of Cecil the Lion
Vegan and Vegetarian Food at Artisan Kitchen in Ormond Beach, Florida 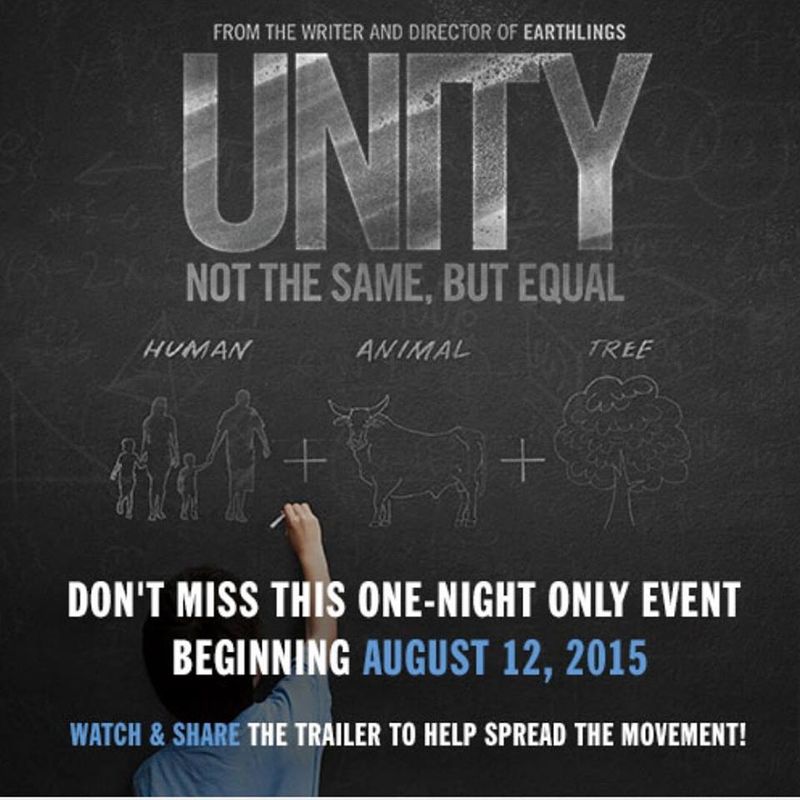 Last night I went to see the new movie "Unity." I had been eagerly awaiting that movie for several years now. I'm a big fan of Shaun Monson's movie "Earthlings." In fact, I think it was one of the most powerful movies I have ever seen. October will be 20 years now that I have been vegetarian (primarily vegan), so I was already not eating animals by the time I saw "Earthlings," yet it was still a very powerful movie.

"Unity" had me crying in the first one minute of the movie. The opening seen was very emotional for me, but I expected no less from Monson's work. He truly has a great way of putting human behavior in front of us and making us ask ourselves how it made us feel to witness it. He doesn't need to tell you that what you are seeing is wrong, because you feel that it is.

For me, the overall message of the movie was that everything is connected. This is something that I've been trying to teach my kids for years. Humans, non-human animals, and everything in nature is all connected. Our actions impact all. The movie also had a Zen-like message of peace and how it begins with ourselves and the way we personally think and act.

While it may have been overly simplistic at times with the message, overall the message is wonderful. What I mean by being overly simplistic at times, for example, included the condemnation of country's having a military and dropping the atomic bombs during WWII. Unfortunately, because we do not all share the "peace begins with myself" mentality around the world it makes having a military necessary. If we didn't have a military we would be taken over and he wouldn't have the freedoms to make such movies. The atomic bombs essentially brought WWII to end, after Nazi's had killed some 20 million people. How many more people would have died had we not taken that bold action to bring it all to an end?

If the entire world were to adopt the peaceful and loving attitude the movie strives for us to all have, then it would be an absolutely beautiful thing. But I don't see terrorist groups, corrupt leaders, and violence-loving individuals finding their inner peace, deciding to have more consciousness and compassion for others, and refraining from violence. A beautiful thought, but one that would be extremely difficult to achieve on a global scale.

Still, I can't blame Monson for trying. His movie says a lot of good things, has an overall powerful message, and is a great starting point for opening up discussion on such issues. My favorite part in the movie was the section on what we eat. There was another scene in the movie involving a fish that hit me particularly hard. It is extremely raw and eye opening about how so many of us humans lack compassion and are disconnected from other living things.

There were over 100 narrators for this movie.  In the Q&A that followed, Monson shared that he got carried away and felt some people in the audience may not like that. Personally, I was one of them. I didn't like having so many narrators. I felt like it was overkill and was distracting to the message of the movie. It seemed like they tried to get every actor they could possibly think of to say a line, yet I wondered how many of those people really believed in what was being expressed. With a message of not competing, having humility, and everyone is on the same level, I'm not so sure all of those celebrities really buy into that message. But on the other side, perhaps it helps them to become more so, and if 100 celebrities tell people about the movie they said a line in, perhaps the message reaches more people.

Overall, the movie "Unity" is a beautiful work of art with a wonderful message. I highly recommend people see it and consider the message and changes they can personally take in order to make this a more compassionate world. And if you haven't already seen "Earthlings," be sure to take that one in, too!