Should vegans and vegetarians travel? Enough of the craziness, please. 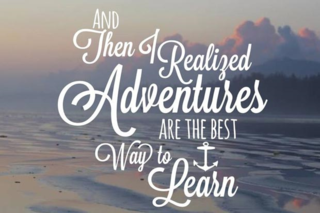 Today someone in one of the online vegetarian forums I belong to posted a question asking about vegan food on cruises. Several people chimed in, including me, offering feedback on our experiences. I'm a veteran cruiser and am happy to give my tips and share my experience regarding dining on the cruise ships.

Then comes the naysayers... the people who say that vegans shouldn't be traveling in the first place, because it creates so much environmental pollution. And they should especially not be taking cruises. Ugh.

Enough of the craziness already! I'm sorry, but life is short and just because I don't want to eat animals doesn't mean I'm not going to vacation either. The latest statistic reports 84% of vegetarians (and almost as many vegans) go back to eating meat. That is the vast majority of people who opt to stop eating animals who then consciously decide to go back to eating them. I've said it before and I'll say it again, this largely has to do with the vegan police.

This year is 20 years I've been vegetarian and in the last couple of years I've never seen it so bad, where the vegan police are constantly telling people what they are doing is not good enough. The bar of what all you must do to be considered doing enough keeps getting raised higher and higher. I can't tell you how many times I have seen people respond to people by essentially telling them that what they are doing is not good enough, that they must do more, more, and more. If they don't, they fall short, they cheat the animals, they don't live up to what it means to be a vegetarian or vegan.

Enough of this nonsense already!

If you really want people to stay vegetarian and vegan stop raising the bar. Stop telling them that what they are doing is not good enough. Someone who stops eating animals should not also have to stop vacationing. Things like that have gotten out of hand and will do far more damage to the animal rights and environmental movement. If someone stays vegetarian, and recycles, uses reusable bags, buys organic when possible, avoids the chemicals, supports GMO labeling, etc. should not be made to feel they are not doing well enough because they vacation.

Life is short. Do some things to help the planet (because when you do that you also help all the animals on it), don't eat animals, but do some things for yourself, too. See the world! The only way to do that is to travel, my friends. There is a lot more to see and explore than outside your front door, and yes, you are going to leave a carbon footprint to do it. But don't deny yourself all you gain from vacationing because of it. Take your vacation, and look for other ways in your life to be more eco-friendly. Just by being a vegetarian or vegan you are far ahead of the game in being environmentally friendly. And no, not vacationing or not taking a yearly cruise is not part of the definition of being a vegetarian or vegan. Everything we do in life has an environmental footprint - from our houses and cars to traveling by plane and everything in between. There is no possible way to live a life that leaves no impact.

The more the bar is raised, the more people who will go back to eating meat. They didn't want to give up vacationing when they chose to be a vegetarian or vegan. Things like this make us veg people see crazy, and rightfully so. If you are someone that is that much of a militant vegetarian or vegan that you refuse to travel, fine. But in discouraging others to do the same you may just be what pushes one of the people in the 84% to throw their hands up, declare they no longer want to try to meet the "rules" and they go back to eating meat, thus creating even more environmental damage (and harm to animals).

Let's stop the craziness so more people will embrace not eating animals, eh? Because in the bigger picture that is what is going to help the environment and animals the most. Not getting someone to stop take their yearly vacation. Research has shown us that the meat industry is by far the world's biggest environmental problem, even more so than all the transportation systems combined. Let's focus on the meat, and we will be so far ahead of this issue!