I recently purchased a copy of "The Happy Herbivore" cookbook when there was a super sale on it. I have never tried her recipes, so I was excited to take a look. I thumbed through the book and saw several I wanted to try. But one really stood out and called to me... the Hippie Loaf! I was in and going to do it asap!

I got everything I needed from the store to make it and decided to pair it with some mashed potatoes and gravy and grapes (and pour some gravy over the loaf as I ate it...yummy idea). The loaf was quite easy to make and get popped into the oven. Meanwhile my husband makes a mean batch of mashed potatoes (he makes awesome mashed taters!). Ding... it's done!

I let the Hippie Loaf cook for an hour to firm up and then let it sit (as the recipe says) another 15 minutes to let it firm even more. Then I spooned it out of the pan. Yes, spooned it... because there was no firming in site. I could have cooked and let that thing sit for hours and firming was not a concept in site. Darn it! It was literally  mush and you had to spoon it. It was more like a quinoa / black bean salad. So okay, I will roll with it. I put it on the plate with the beautiful mashed taters and grapes and sit down to a nice dinner. Blech!

The Hippie Loaf is awful. Nobody in the family likes it! I am so darned disappointed... I wanted to like this so, so, so badly. I really did! But it was awful! Even eating it as a quinoa / black bean type of salad it was no good. So our dinner ended up being great mashed potatoes and grapes, and we ended up ditching the Hippie Loaf. Darn!

Here's a picture of the dinner: 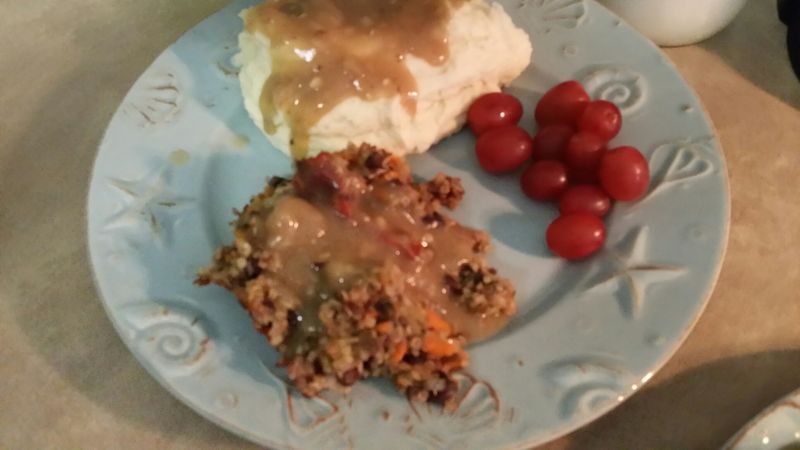