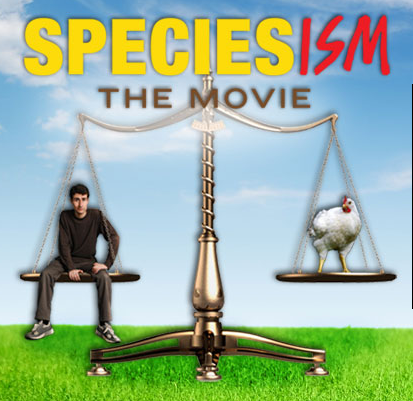 When I first saw the trailer for the move called "Speciesism: The Movie," I was intrigued. I was looking forward to seeing it and when it showed up in my newsfeed one day that the movie was having a special sale I didn't hesitate. I immediately made a few clicks and bought the movie.

This week we watched the animal rights documentary. It's not the best movie I have seen that focuses on animal rights issues, but it's still pretty good. There were some things in there that I didn't like, such as so much time being given to PETA. Why? Because PETA is an embarrassment to the animal rights movement. They make a mockery out of animal rights issues. I've said it many times before and I'll say it again... PETA is good at one thing and that's fundraising. Period. They are an organization that routinely kills animals and offends the masses. Their approach is the reason why when you say you are a vegetarian/vegan that people automatically think you are some kind of whacko. They are an embarrassment.

But if I look past the time that PETA was given in the movie there was some great information in there. I really loved how he showed the environmental damage caused by the meat industry (an issue that is important to me). He goes up in a helicopter to show all the lagoons of waste that dot the landscape and cause environmental damage. Although I know about those lagoons it was great to see that footage. He also interviewed some interesting people about that environmental damage.

I also loved some of the people he interviewed in there, including Gary Francione (one of my favorites), Peter SInger, Tom Regan, and others. I really enjoyed those segments. I also really liked the segment where he gets to the bottom of what beings are worthy of compassion and why.

While there are a few segments that I feel should have been edited out of the movie, including the PETA stuff (because they are an embarrassment and tying their name to things diminishes whatever it's been tied to) and the space segment (it was off track), it was overall a good movie and worth watching.

If you have a chance to check it out I do recommend doing so! It is an animal rights documentary worth adding to your collection and can be the starting point to a great conversation.

You can purchase the Speciesism: The Movie

online. Here's the trailer for "Speciesism: The Movie