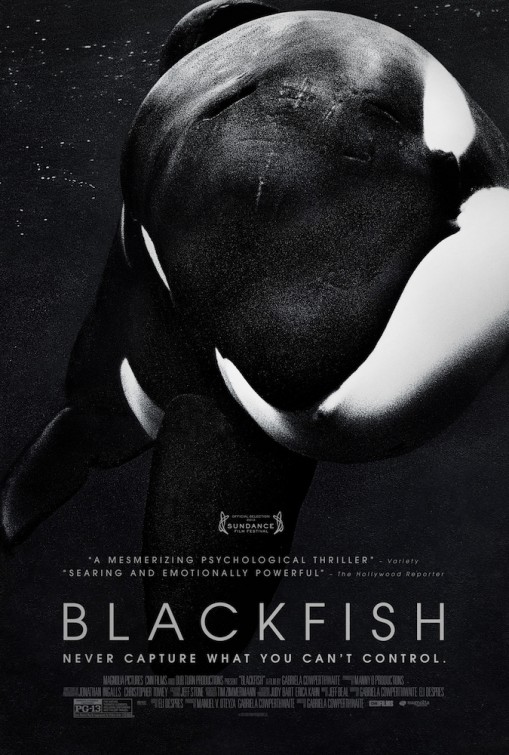 Yesterday I got to see the movie "Blackfish." I was really anticipating seeing this movie, ever since I saw the trailer for the first time. We at the Daytona Beach Vegetarian Society arrived at the movie theater early so we could set up a table. We handed out free samples of chocolate almond milk (which people were loving), as well as brochures on captive whales and dolphins.

Then it was time for the movie to start. I really liked how the movie featured so many former SeaWorld trainers, as well as OSHA researchers. I think they lend a lot of credibility to the film and information in it. I also liked the raw video footage that was featured in the film. It's one thing to tell the story of a trainer being held under water by a whale, but it's another to watch it play out in an actual video. Wow!

I went into this movie already on the side of not supporting having whales and dolphins in captivity. I have written in the past about what is wrong with SeaWorld (here), and also watched and reviewed "The Cove" (here). Blackfish merely strengthened my feelings on how wrong it is to have whales and dolphins in chlorinated prisons.

Following the movie the theater director led a discussion with those of us in the audience. It was interesting, I said a lot (I had planned on saying nothing, but couldn't hold back), and it was a good discussion.

Two thumbs up for Blackfish! I am so thankful for movies like this so that people can see another side. I sincerely hope that Blackfish helps to open hearts and minds and get people to stop supporting such animal cruelty.

There are several campaigns out there about freeing Tillkum (the killer whale). While their heart is in the right place, this fight shouldn't be about just freeing Tillikum. If he were freed, then what? We go back to business as usual? No... the fight needs to be in freeing all captive whales and dolphins. They all deserve freedom and the ability to live their own lives. Free all the whales!